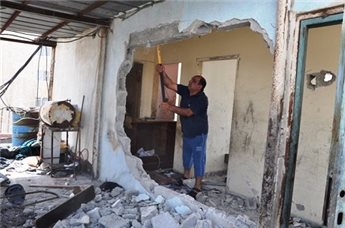 Palestinian tearing down his own house to avoid paying high costs to the Israeli municipality in West Jerusalem. (File photo)

JERUSALEM, Tuesday, July 06, 2021 (WAFA) – The Israeli occupation authorities today forced a Palestinian to demolish his house in the East Jerusalem neighborhood of al-Tur to avoid paying exorbitant costs if the Jerusalem municipality carries out the demolition on its own, according to WAFA correspondent.

He said that the Abu Ghannam family, which owned the house, opted to tear down its three-story home on its own to avoid paying over $60,000 in costs to the municipality for the demolition costs.

The municipality claimed the house was built without a permit and therefore issued a demolition order against it giving the owner the option to tear it down himself, otherwise, the municipality would demolish it and force him to pay costs.

This is the second time Abu Ghannam’s home has been demolished; the first time was in 1994.