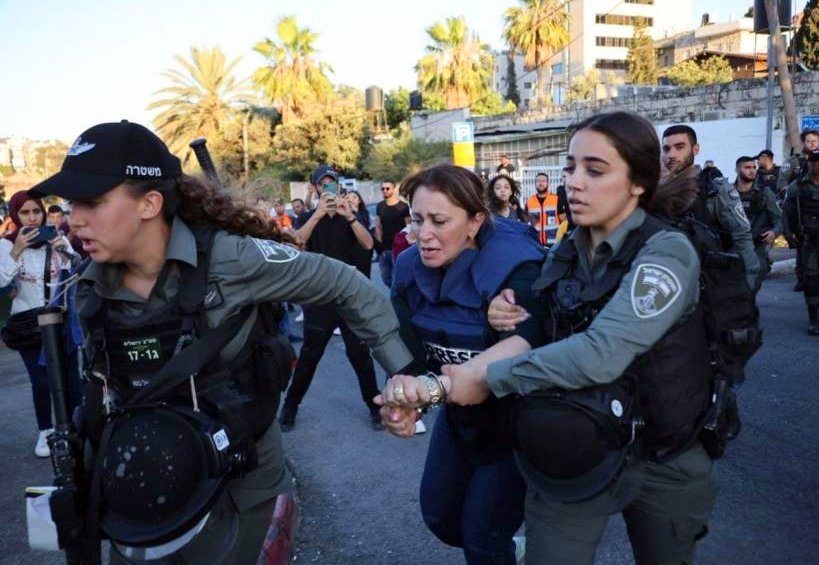 Givara al-Budeiri was wearing a jacket marked 'press' when she was arrested on June 5, 2021

In a press release, the Ministry denounced the violent behaviour of the Israeli police towards Al-Budeiri during her coverage of Israeli police attacks on nonviolent protesters in the Sheikh Jarrah neighbourhood.

Al-Budeiri was covering the demonstrations of solidarity with the Sheikh Jarrah neighbourhood on the 54th anniversary of the Naksa, when Israel occupied the West Bank, East Jerusalem, the Gaza Strip, the Golan Heights, and Sinai.

The Ministry of Information reiterated its call upon the UN Security Council to implement its resolution 2222 and the relevant UN frameworks on the protection of journalists, and the need to hold perpetrators to account.

Al-Budeiri was detained for several hours yesterday in an Israeli police station on Salah El-Din Street in Jerusalem after being handcuffed and violently pushed.

Four days ago, the Israeli police released two Palestinian journalists from Jerusalem, Wahbi Makkiya and Zina Halawani. Their conditional release required serving house arrest for five days, deportation from the Sheikh Jarrah neighbourhood for a month and paying a fine of about 600 dollars.

Journalists Zeina Al-Halawani and her colleague Wahbi Makkiya were detained on May 28 while covering the events of Sheikh Jarrah. During their arrest, they were beaten and left to suffer from various bruises.

Israeli settlers throw stones, release dogs at women shepherds in the south of the West Bank