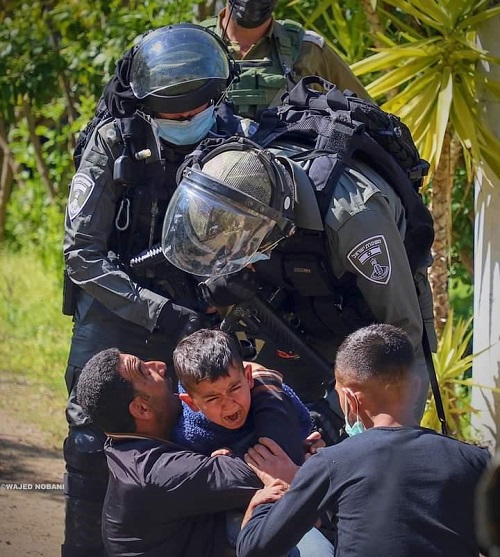 NABLUS, Friday, March 19, 2021 (WAFA) – Several Palestinians sustained injuries today by Israeli occupation forces, as the former were fending off a provocative visit by colonial Israeli settlers to an archeological site in the village of al-Lubban ash-Sharqiya, south of Nablus city in the occupied West Bank, according to WAFA correspondent.

He said that scores of Israeli settlers accompanied by soldiers forced their way into Khan al-Laban, an Ottoman-era site near the village, and blocked access of local Palestinian citizens to the site.

The Israeli soldiers fired teargas towards the villagers who attempted to fend off the provocative visit and physically assaulted and pushed some of them, causing several injuries among them.

The settlers came from the nearby colonial settlement of Ma'ale Levona, established in 1983 on Palestinian-owned land.

Settler violence against Palestinians and their property is commonplace in the West Bank and is rarely prosecuted by Israeli occupation authorities.

Over 700,000 Israeli settlers live in Jewish-only colonial settlements across the West Bank in violation of international law, particularly the Fourth Geneva Convention which expressly bans the relocation of the occupying nation's civilian population to the land of the occupied.