Officials: US labelling of settlement products as made in Israel demands immediate legal interventions 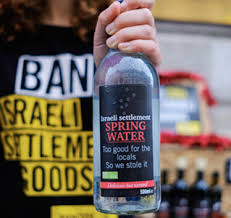 RAMALLAH, Saturday, December 26, 2020 (WAFA) – United States labelling of products made in the illegal settlements in the occupied Palestinian territories as made in Israel is a violation of international law and demands immediate legal interventions, today said Palestinian officials.

Justice Minister Muhammad Shalalda told the official Voice of Palestine radio that the US decision to mark settlement products as being made in Israel demands suing the US government first in US courts and then at the International Criminal Court and regional courts.

The decision by the administration of US President Donald Trump is contrary to United Nations Security Council Resolution 2334, and a violation of the Fourth Geneva Convention, human rights, and the advisory opinion of the International Court of Justice, which affirms the illegality of settlements or providing any assistance to them, said the Justice Minister.

Economy Minister Khaled Osaily said that the US administration's marking of settlement products as made in Israel aims to create facts on the ground and steal Palestinian resources and products. It is a violation of international laws and conventions that criminalize settlements and consider them illegal, he said.

He told Voice of Palestine radio that the Palestinian government will pursue this issue at international courts and will sue companies working in the settlements, in addition to calling on the European Union to ban the entry of settlement products because the settlements are built on occupied lands.

Meanwhile, Justice Minister Shalalda said that his ministry is considering taking the issue of Israeli settler attacks against Palestinian civilians in the occupied territories to international criminal courts, calling on the international community to classify settler attacks as terrorism and to hold them accountable for their acts.