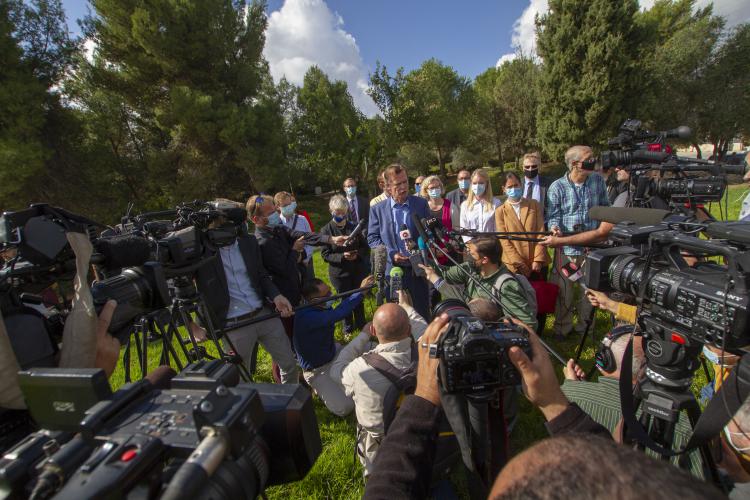 JERUSALEM, Monday, November 16, 2020 (WAFA) – European Union (EU) heads of mission in Jerusalem and Ramallah and like-minded countries organized a visit to the illegal Israeli settlement of Givat Hamatos to the south of Jerusalem in protest of Israeli authorities’ approval to construct 1257 new settlement housing units there.

Heads of Mission and representatives from the EU, Austria, Belgium, Denmark, Finland, France, Germany, Ireland, Italy, Malta, Netherlands, Poland, Spain, Sweden, and Norway and Switzerland visited today the designated location for Givat Hamatos settlement. The visit came after the Israeli authorities’ announcement of the bidding procedure for 1257 units in this new settlement.

The diplomats urgently convened to overlook the site for the planned new settlement in the occupied West Bank, where they were briefed by representatives from civil society organizations and discussed the repercussions of the Israeli authorities' decision.

“The Israeli announcement of opening the bidding for Givat Hamatos, situated between Jerusalem and Bethlehem in the occupied West Bank, is of great concern to the EU and likeminded countries. It forms part of a worrying trend where Israel continues its policy of advancing settlements in the occupied Palestinian territory,” said the EU Representative Sven Kühn von Burgsdorff in a statement.

” If Israel is to go ahead with its plans for a settlement here, it would cause serious damage to the prospects for a viable and contiguous Palestinian State. More broadly, it will threaten the viability of a negotiated two-state solution, in line with the internationally agreed parameters and with Jerusalem as the future capital of two states. we are also here today to reiterate our firm position that settlements are illegal under international law, and that all settlement activity must stop", he added.

The EU heads of mission and like-minded countries stressed that the planned expansion of the Givat Hamatos settlement would sever the geographical continuity between the cities of Jerusalem and Bethlehem.

A number of settlers, including members of the West Jerusalem Israeli municipality, interrupted the EU diplomats while giving a statement over Israel's planned expansion of Givat Hamatos settlement, chanting slogans such as “anti-Semites”, and “shame on you EU.”

European Union High Representative Josep Borrell warned on Sunday that the announced Israeli settlement activity will lead to the continuing weakening of efforts to rebuild trust and confidence between the parties which is necessary for an eventual resumption of meaningful negotiations.

“This is a key location between Jerusalem and Bethlehem in the occupied West Bank. Any settlement construction will cause serious damage to the prospects for a viable and contiguous Palestinian State and, more broadly, to the possibility of a negotiated two-state solution in line with the internationally agreed parameters and with Jerusalem as the future capital of two states,” he added.

“The Government of Israel should instead show vision and responsibility and reverse these negative decisions at this critical and sensitive time,” he said in a statement.

The EU has repeatedly called on Israel to end all settlement activity and to dismantle outposts erected since March 2001.

This Israeli new announcement follows one month after the approval by the Israeli Higher Planning Council (HPC) under the Civil Administration of the advancement of 4,948 housing units in Israeli settlements in the West Bank.