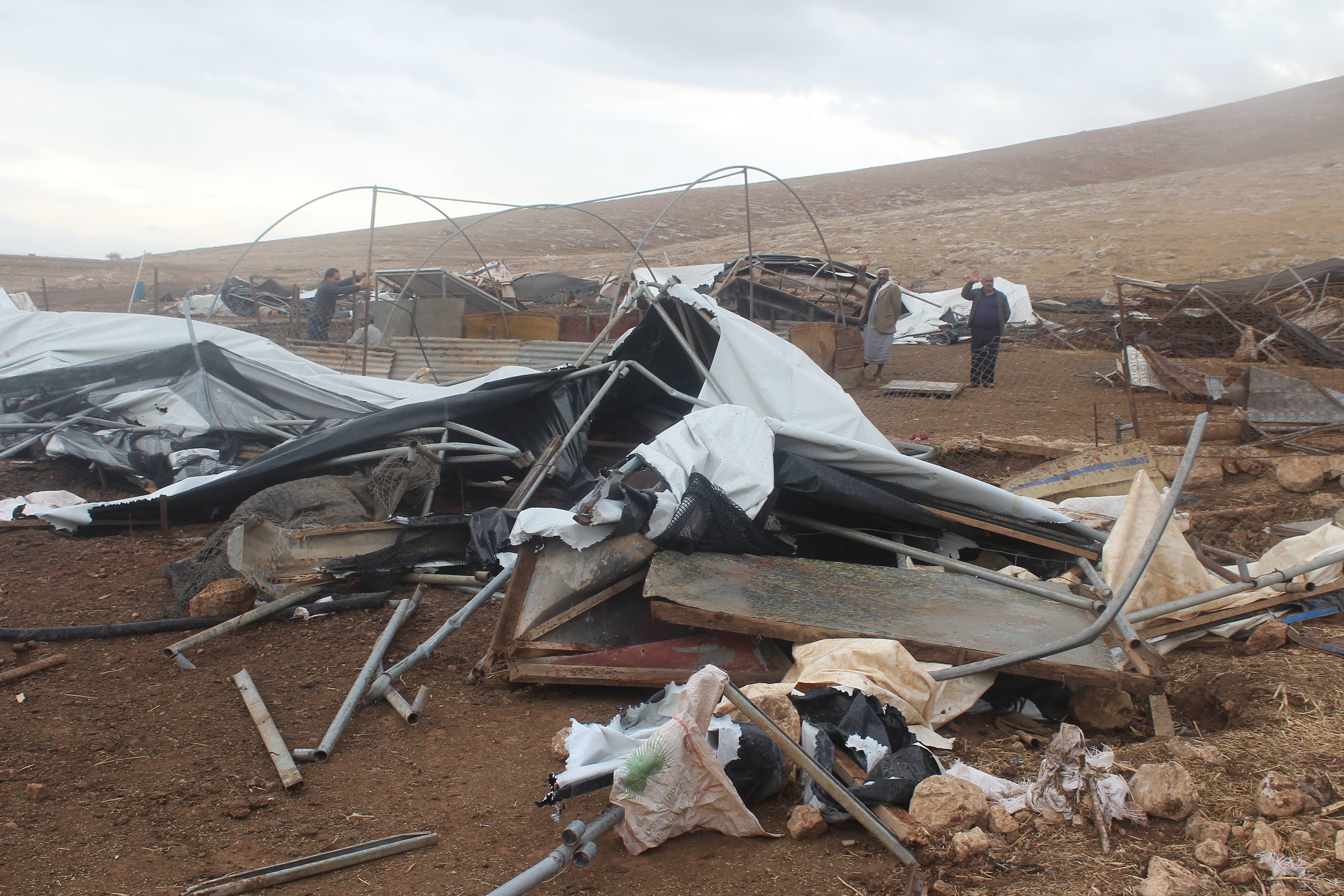 Remains of the Israeli demolition of Khirbet Hamsa al-Fawqa in the Jordan Valley.

JORDAN VALLEY, Wednesday, November 4, 2020 (WAFA) – Life of people in Khirbet Hamsa al-Fawqa in the northern Jordan Valley was going on normally and as usual, at least until yesterday at noon when things changed when as bulldozers of the Israeli occupation authorities leveled to the ground dozens of structures owned by the Palestinian families.

In the beginning, the extent of the demolitions was not clear even though initial reports talked about "unprecedented" demolitions taking place in the area.

It became clear later, according to the documentation of the Wall and Settlement Resistance Commission, that the occupation authorities have demolished nearly 70 structures, including residential housing units, barracks, sheep sheds, and solar panels for 11 Palestinian families composed of 60 people.

In addition, the occupation forces seized tractors, water tanks, and vehicles for residents of Khirbet Ibziq in the northern Jordan Valley.

Human rights activist Aref Daraghmeh described what happened in Khirbet Hamsa as “a new nakba (catastrophe)” for its people who live off raising livestock and benefit from the open plains to provide free food for their livestock.

"They destroyed everything for us,” said Nizam Abu Kabbash, one of the residents, as he was going through the rubble. “Now life has no meaning.”

Anas Awawdeh, another person affected by the demolitions, says: "I have never seen anything like this in the 10 years that I lived in the place."

"Level them to the ground." This is what Awawdeh heard an Israeli army officer telling the driver of the bulldozer.

The head of the Wall and Settlement Resistance Commission, Walid Assaf, told WAFA that what happened was a policy of scorched land, and that the occupation was pursuing a policy of total demolition of Palestinian communities in order to empty the land."

It was possible to see all the tents and structures leveled to the ground, with the exception of tents that were provided last night by human rights organizations and the Red Cross for the afflicted families.

But Abu Kabbash said that the tents did not accommodate everyone and that some of them spent their nights in their private vehicle.

This was echoed by Awawdeh, who told WAFA reporter that he had to send his children and his wife to relatives in a faraway place, noting that there were no indications of the demolition and that it all happened suddenly at noon.

"They picked a time before the rain came," he said. "We live here a difficult life and this night was one of our worst nights."

The sky was covered with clouds and there was rainfall as the residents were working on retrieving their stuff.

The Israeli human rights center B’Tselem says that for decades, the occupation authorities have implemented a policy aimed at displacing these communities by creating a living reality that is difficult to bear, and pushing people to leave their homes "as if it was of their own free will."

According to B'Tselem, there are approximately 2,700 people living in about 20 communities in the Jordan Valley, on lands, or on the outskirts of lands that the army declared firing zones. The occupation authorities seek, by various means, to prevent people from continuing to reside in the area, and among those means is the demolition of their homes repeatedly.