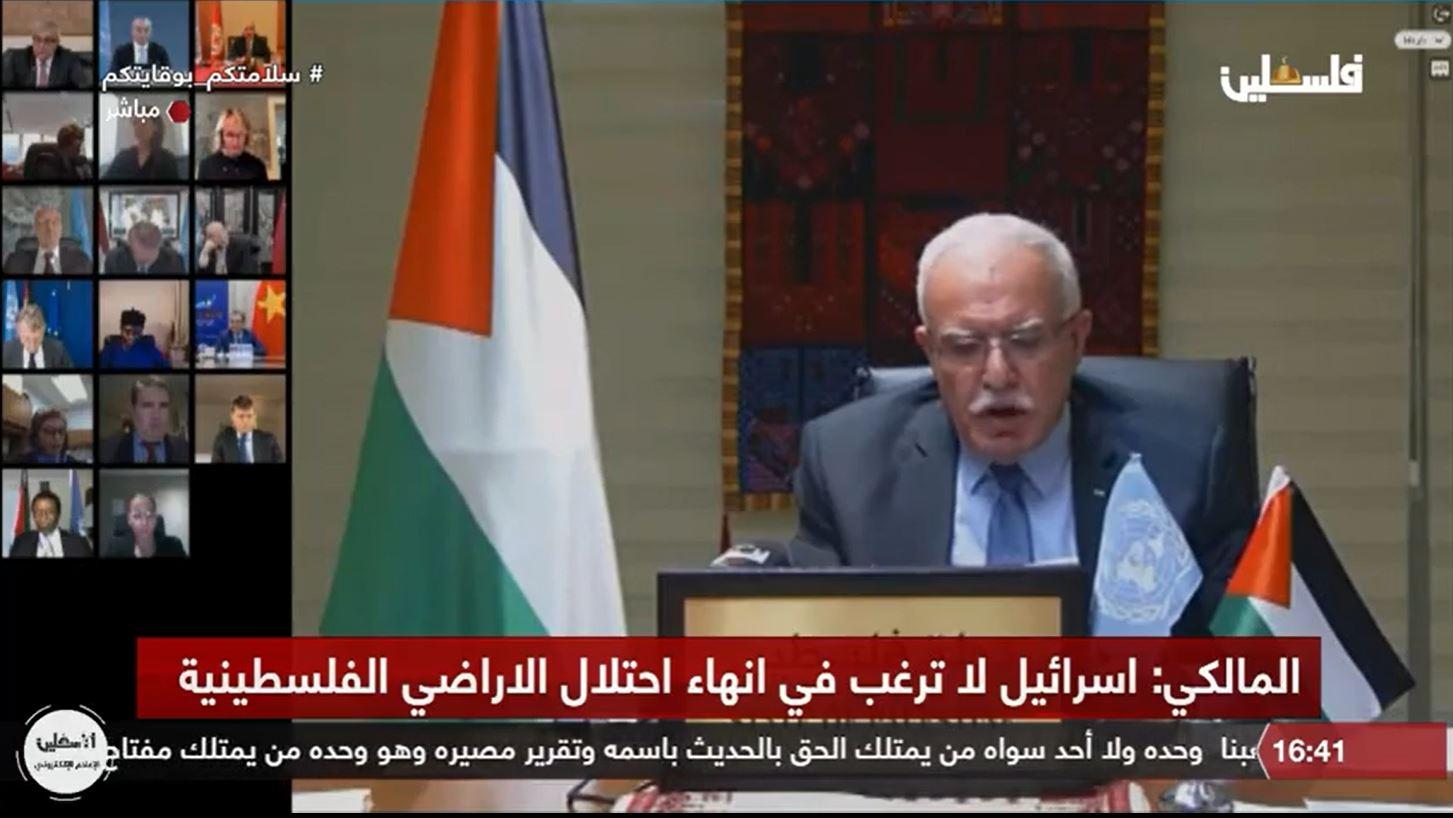 RAMALLAH, Monday, October 26, 2020 (WAFA) – Speaking at the open debate of the United Nations Security Council today to discuss President Mahmoud Abbas' call on the UN Secretary-General to convene an international peace conference to resolve the Palestinian-Israeli conflict, Foreign Minister Riyad Malki said that this call is the ultimate demonstration of Palestinian commitment to peace.

"This call is the ultimate demonstration of our commitment to peace and to a path based on inclusion, not exclusion, legality not illegality, negotiations not diktats, multilateralism not unilateralism," he said at the session held virtually.

"The international peace conference can generate the necessary momentum and mobilize the international community at large to help the parties negotiate a peace agreement that will forever change our region. Anything else is volatile, and it is futile," said Malki.

At the outset, I wish to thank you for presiding over this meeting and for the leadership role of Russia in the pursuit of Middle East peace. Let me also thank my brother Mohamed Ali Nafti for participating in this meeting, and to welcome H.E. Mr. Dang Minh Khoi.

I also want to thank Mr. Mladenov for his briefing.

It is time to drop the old talking points.

It is ridiculous to claim that the Palestinians “never missed an opportunity to miss an opportunity”, when in fact the PLO signed an agreement with Israel just months after the start of the first ever negotiations between the two sides, despite all the shortcomings of those accords, which history has proven.

It is absurd to claim that it is the Palestinian side that does not want negotiations, when Israel is the one trying, on the ground every single day, to illegally preempt the negotiations on all final status issues.

It is ludicrous to claim that the obstacle to peace is Palestinian intransigence, when our positions are actually aligned with the international consensus and the resolutions of this Council, while Israeli positions and policies are flagrantly in breach of international law and UN resolutions.

The parties identified final status issues that should be negotiated based on internationally-agreed terms of reference and parameters by 1999. Here is Netanyahu’s stance on these issues: Jerusalem, including occupied East Jerusalem, shall be Israeli. Illegal settlements shall remain in place. Refugees shall remain refugees. Israel shall continue to control our borders. Israel shall control all of the Jordan Valley and with it most of our natural resources. These positions are contemptuous and unlawful, and they translate into a simple truth: Israel does not want to end its illegal occupation; it wants to make it permanent. And we are the ones labeled ‘intransigent’?

It is time to abandon the failed recipes of the past.

We cannot allow Israeli unilateralism to prevail while the world continues calling for bilateral negotiations.

It is no longer enough to call on parties to negotiate; this call must be accompanied by measures to incentivize respect for obligations and to dissuade from illegal unilateral actions.

It is no longer enough to say settlements are illegal, one must ensure accountability, distinction and non-assistance.

It is no longer enough to speak of a two-State solution; it must be accompanied with the recognition of the State of Palestine and support to its sovereignty over the territory occupied since 1967, including East Jerusalem.

We could have tried to find answers to Israel’s violence through violence, to be heard and considered relevant. We did not.

We could have adopted a disruptive behavior since constructive behavior is underrated these days. We did not.

We could have contributed to transforming this political conflict into a religious one, fueling it so we are not the only ones to feel its flames. We did not.

If we are punished while making such a choice, while on the other hand Israel is rewarded, what is being encouraged: peace or violence?

Despite decades of Israel’s oppressive policies, and of measures aimed to bring us to our knees, politically and financially, President Abbas called in his message to the General Assembly, as he has before this Council, the UN Secretary-General to undertake, in cooperation with the Quartet, mandated by this body to advance peace, and the Security Council, preparations to convene an international conference, with the participation of all concerned parties, early next year, to engage in a genuine peace process, based on international law, UN resolutions and the relevant terms of reference.

This call is the ultimate demonstration of our commitment to peace and to a path based on inclusion, not exclusion, legality, not illegality, negotiations not diktats, multilateralism not unilateralism. I know many of your countries have already expressed support to President Abbas’s initiative and we look forward to continue working with all of you to see it materialize, including through meetings of this Council, such as this one held during Russia’s presidency.

As long as Israel does not bear the cost of occupation, and instead continues reaping its benefits, it will never negotiate in good faith. The international community must address the shortcomings of the past, by linking its relations with the parties to their respect of their obligations under international law and the peace process, by helping them reach an agreement and implementing it and by enforcing a binding timeframe.

The international peace conference can generate the necessary momentum and mobilize the international community at large to help the parties negotiate a peace agreement that will forever change our region. Anything else is volatile, and it is futile.

Israel often wonders why we enjoy such international solidarity. It is because former colonial powers and liberation movements alike know these colonial policies well: violence, subjugation, intimidation, mass arbitrary imprisonment, discrimination, humiliation, fragmentation of the land, confinement of the occupied people, expansion of illegal settlements, exploitation. They cannot support such actions. History has taught them better.

The international consensus, UNRWA’s mandate and role, the Palestinian people’s resilience have all been sorely tested. And yet they prevail. It is now time to take the initiative. There isn’t a people too many in the Middle East, there is an independent state missing. You cannot solve the Middle East equation by denying this fundamental factor. You cannot end this conflict without freedom for the Palestinian people, and our freedom will never be compatible with Israeli soldiers in our streets, Israeli drones in our skies and Israeli control over our borders.

Ask Maher al-Akhras who has been on hunger strike for over 90 days to denounce, at the peril of his life, the most arbitrary form of detention, the so-called administrative detention, ask Amer Snobar, barely 18, and beaten to death yesterday by Israeli soldiers who had apprehended him and kept hitting him on his head and neck with the butt of their rifles until he could no longer breathe, ask the mother of the child killed on his way to school, the athlete whose leg was amputated after a sniper acted as if he was playing a videogame, the owner of a house built by years of sweat and destroyed in an instant, and the farmer whose crops were burnt by settlers, they will all tell you “we will not coexist with occupation”. We want to end occupation, so we can coexist, so we can know justice, so we can be free, so our region can know true peace and security.