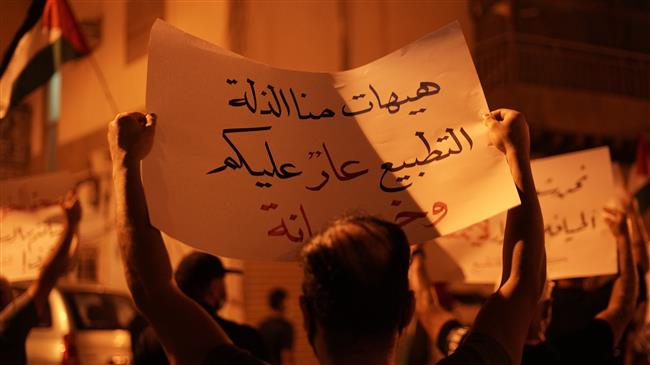 Picture posted on Twitter on September 12, 2020 shows a protest against the government's normalization of its relations with apartheid Israel

MANAMA, Sunday, September 13, 2020 (WAFA) – Bahrainis rallied throughout the kingdom last night condemning the government’s declaration on normalizing its relations with the occupying state of Israel, setting Israeli flags on fire in defiance of a government ban on protests.

Protests reportedly took place in the northern villages of Karrana and Abu Saiba, the central village of Shakhura, the village of Sanabis on the outskirts of Manama, and the village of Sadad on the country’s west coast, according to Iranian state-run Press TV network.

The al-Wefaq National Islamic Society, Bahrain's main opposition group, posted pictures of the rallies that took place in the capital Manama as well as many other locations across the country. The protesters decried the declaration as a betrayal of the Palestinian cause and condmened Manama’s intention to exchange embassies with the occupying state of Israel.

The participants waved the Palestinian flags and banners expressing outrage at the normalization, and set fire to Israeli flags.

On Friday, US President Donald Trump announced Bahrain’s normalization of ties with the Israeli occupation, about a month after Washington brokered a deal establishing formal ties between the United Arab Emirates and the occupying state.