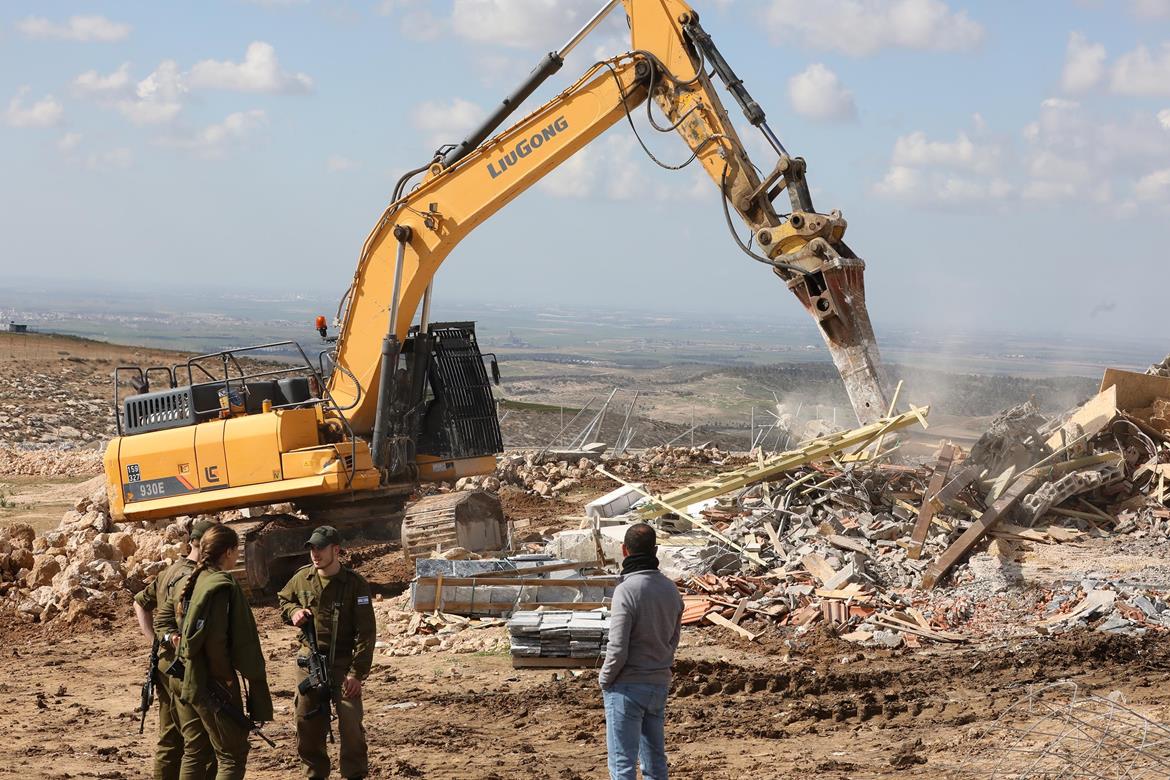 Israeli demolition of Palestinian-owned structures in the occupied territories.

JERUSALEM, Saturday, July 23, 2022 (WAFA) - The Israeli occupation authorities demolished, confiscated, or forced people to demolish 51 Palestinian-owned structures in East Jerusalem and Area C of the West Bank, citing the lack of Israeli-issued building permits; four of the structures had been provided as donor-funded humanitarian aid. As a result, 40 people, including 21 children, were displaced, and the livelihoods of about 500 others were affected, according to the United Nations Office for the Coordination of Humanitarian Affairs (OCHA) in the occupied Palestinian territory.

It said in its biweekly Protection of Civilians Report covering the period between 28 June and 18 July that some 47 of the targeted structures were in Area C, including two structures in southern Hebron areas which are designated as ‘firing zones’ for military training, and where Palestinian communities are at risk of forcible transfer.

On 5 July, the Israeli authorities demolished a 200-meter-long concrete wall around a water spring facility in a ’nature reserve’ in Duma, near Nablus, for lacking building permits; as a result, the water valve was destroyed and the water network damaged. This demolition directly affects access to water and the livelihoods of at least 22 households, comprising 132 people.

Four structures were demolished in East Jerusalem, including one home destroyed by its owners to avoid paying the fines issued by Israeli authorities.

On four occasions, said OCHA, Israeli forces conducted military training exercises near the 13 Palestinian herding communities of Masafer Yatta in southern Hebron. This area had been designated by the Israeli authorities as a ‘firing zone’ and was declared closed for Israeli military training. The recent military exercises restricted the access of Palestinians to basic services and sources of food, and put their safety at risk.

On 7 July, the roof of a house was damaged by live ammunition while the family was inside. Use of live fire and explosions were reported on two other occasions. On 4 May, the Israeli High Court of Justice approved the eviction of Palestinians living in Masafer Yatta, putting 1,144 people, including 569 children, at imminent risk of forcible transfer. On 23 June, the Acting Humanitarian Coordinator called for a halt to demolitions, military activities and other increasingly coercive measures, so that residents can remain in their homes in safety and dignity.

Also during the reporting period, Israeli occupation forces shot and killed three Palestinians in three separate search-and-arrest operations in Jenin in the West Bank. On 29 June, an Israeli undercover unit raided Jenin city, resulting in confrontations with residents and an exchange of fire with armed Palestinians. One Palestinian man was shot and killed. According to the Israeli Military, cited by Israeli media, the man threw an explosive device at soldiers. Initial investigations by human rights organizations indicate that the man was not involved in any clashes. Two other Palestinians were arrested in the same operation.

On 3 July, an 18-year-old male student died of wounds sustained the day before, when Israeli forces shot him with live ammunition during a search-and-arrest operation in Jaba’ village (Jenin). According to eyewitnesses, Israeli forces fired live ammunition at residents who threw stones at them. On 6 July, Israeli forces chased, shot, and killed a 20-year-old man during another search-and-arrest operation in the same village. While Israeli forces had reportedly declared him a wanted person, community members said he was a passerby who started running upon seeing soldiers, fearing for his safety. His body is still being withheld by the Israeli authorities.

Since the beginning of the year, Israeli forces have shot and killed 29 Palestinians, including six children, during search-and-arrest operations across the West Bank; 19 of the fatalities were in the Jenin governorate.

One Palestinian man died, four others were injured, and 21 were arrested while trying to reach their worksites in Israel through informal openings in the West Bank Barrier. On 5 July, a 32-year-old Palestinian man died in unclear circumstances. According to the man’s family, he was beaten by Israeli forces while trying to cross into Israel through a breach in the separation barrier. According to Palestinian medical sources, his death was caused by heart failure.

On five separate incidents, Israeli forces shot live ammunition at Palestinians trying to cross into Israel through informal Barrier openings near Tulkarm, Jenin, Hebron and Qalqilya injuring four of them and arresting 21.

Also during the two-week reporting period, Israeli forces restricted the movement of Palestinians in several other locations across the West Bank. Forces closed the gate at the main entrance to Kifl Haris near Salfit; installed a new checkpoint at the entrance to al Lubban al-Sharqiyah, near Nablus; blocked with earth-mounds six roads that connect Huwwara, south of Nablus with Road 60 and nearby villages; and restricted with two roadblocks the access to agricultural roads in two locations in Halhul, in the south of the West Bank. This resulted in long detours, disrupting the access of about 20,000 Palestinians to livelihoods and services.

Israeli settlers also injured 11 Palestinians and damaged Palestinian property in 15 instances. Settlers attacked Palestinian farmers while they were working on their lands, using sticks, batons, and metal bars, and threw stones, injuring six Palestinians, including one elderly man. Five other Palestinians were injured by settlers in Silwan in East Jerusalem.

In 10 incidents, about 1,100 Palestinian-owned trees were uprooted or vandalized near Israeli settlements. Ten Palestinian-owned cars and a tractor were also vandalized, and stone-throwing was reported, causing damage to two Palestinian homes and shops. Another four incidents in Nablus and Ramallah, included settlers breaking into a house and farmland, damaging a water facility, and vandalizing cultivated crops and agricultural equipment.

On 6 July, six shops owned by Palestinians in the closed military area of H2 in Hebron were demolished, reportedly by Israeli settlers. Israeli authorities have not allowed Palestinian shop owners to use these businesses throughout the years, citing “the principle of separation”. Settlers are currently using the site as an animal shelter.