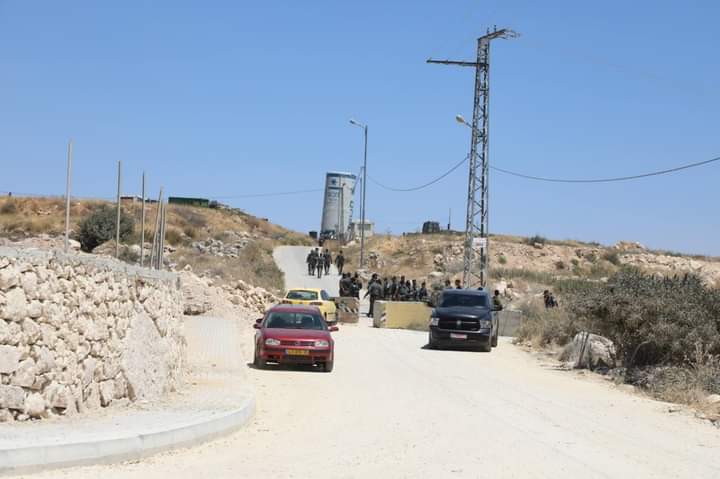 Israeli army sets up cement blocks on road leading to al-Buwairah area, east of Hebron, where settlers are trying to seize.

HEBRON, Thursday, July 21, 2022 (WAFA) – Israeli settlers today set up a number of tents and wooden caravans on Palestinian-owned lands in the al Buwairah area, east of the southern West Bank city of Hebron, as soldiers blocked the road leading to it with cement cubes, according to local sources.

They said dozens of settlers broke into al-Buwairah area, which is surrounded by the settlements of Kiryat Arba and Kharsina, and set up a number of tents on land belonging to families from Hebron in order to seize the land and establish a new settlement outpost.

Abu Iyad Jweihan, a local resident, told WAFA that dozens of settlers came to the area after midnight and set up tents and wooden caravans on the land that belongs to the Abu Sneineh family in the al-Buwairah area. However, the occupation forces removed them and evacuated the settlers from the area, but the settlers returned in the morning and re-erected the tents.

The al-Buwairah area is considered one of the most fertile lands in the city of Hebron, and it is constantly exposed to repeated attacks by settlers because it is located between the settlements of Kiryat Arba and Kharsina, which are built on Palestinian lands east of the city.