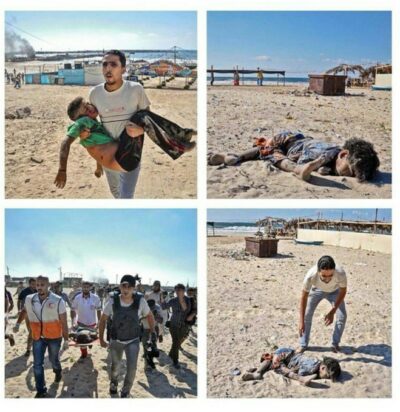 The Bakr boys killing in an Israeli airstrike while playing on the beach in Gaza in 2014.

JERUSALEM, Monday, April 25, 2022 (WAFA) - A three-justice panel of the Israeli Supreme Court yesterday rejected a petition against closure of investigation filed by the Bakr family, parents of four boys who were killed in an Israeli air force missile attack while they were playing on the beach west of Gaza City on 16 July 2014 during the Israeli military offensive in Gaza termed "Operation Protective Edge", according to a press release by Adalah.

The petitioners demanded that the Court overturn the Attorney General’s (AG) decision to reject an appeal against the closure of the investigation and to order the opening of a criminal investigation that will lead to the prosecution of those responsible for the killing. The AG’s decision, dated 9 September 2019, announced that he had fully adopted the Military Advocate General's (MAG) decision to close the investigation.

The petitioners argued that the investigative materials show that the Israeli air force intentionally opened deadly fire at the children in serious violation of the laws of war and criminal law since they aimed at the children directly without identification and without taking the necessary precautions.

The petitioners presented evidence showing extensive flaws in the probe conducted by the Israeli investigative authorities and many contradictions in the testimonies and investigation. The Court, however, ruled that it sees no reason to intervene in the AG’s decision, and did not address the substance of any of the petitioners’ arguments regarding the flaws in the probe.

The 11-page judgment written by Chief Justice Esther Hayut was also unanimously accepted by Justices Alex Stein and Isaac Amit. The Court’s decision states that the MAG’s decision to close the case was made after "the incident was comprehensively and thoroughly investigated," taking into account intelligence information allegedly held by the military prior to, and during the attack.

The ruling relies, among other things, on secret evidence, reviewed only by the Supreme Court outside of the presence of the petitioners’ lawyers, which according to the Court, substantiates the Israeli military’s claim that the perimeter attacked was used by Hamas forces.

The ruling repeated the AG’s determination that the missile attacks were carried out in compliance with the principles of distinction and proportionality and in accordance with military procedures. It further stated that “this court has repeatedly emphasized the uniqueness of the combat operation, which is characterized by high intensity, which requires the military forces to make quick decisions on the ground and to take risks under conditions of uncertainty.”

The Court also rejected the petitioners’ arguments of conflict of interest inherent in the dual role of the MAG: the MAG provides legal advice to the army before and during military operations, and at the end of the fighting, he also decides whether or not to open a criminal investigation and how to conduct it.

In its determination, the Court relied on the Turkel Commission Report (2013) on the compatibility of “Israel’s mechanisms for examining and investigating complaints and claims of violations of the laws of armed conflict” with Israel’s obligations under international law. Specifically, it referred to the Turkel Commission’s position that the system is independent and it complies with international law.

The petitioners contend that in this ruling, the Supreme Court essentially gives full license to the Israeli military to kill civilians with the widest impunity. Rather than assessing the military’s decisions during combat, the Court gave general statements as to the wide scope of discretion of the MAG and the AG.

This case garnered extensive international media and public attention, especially due to its occurrence near a hotel where many foreign journalists were staying. Notably, in conducting its investigation, the Israeli military did not collect testimonies from these journalists or from Palestinian witnesses who were on site at the time of the killing, said Adalah in its press release.

The UN Independent Commission of Inquiry on the 2014 Gaza Conflict (CoI), in its report of June 2015, was deeply disturbed by the closure of this case, stating that there were "strong indications that the actions of the IDF were not in conformity with international humanitarian law and that the investigation does not appear to have been carried out in a thorough manner.”

Adalah, Al Mezan and PCHR commented: “The Israeli Supreme Court ruling in the Bakr boys’ case is further evidence that Israel is unable and unwilling to investigate and prosecute soldiers and commanders for war crimes against Palestinian civilians. This fact highlights the pressing need for independent, effective investigations, to hold all perpetrators to account. This case clearly illustrates the Israeli military’s indiscriminate, lethal assaults on Palestinian civilians during the 2014 Gaza war, in which over 550 children were killed, and the mobilization of the Israeli legal system to defend Israeli aggression, affording total impunity and discretion to the Israeli military. This case is further proof of the need for international actors, including the International Criminal Court, to hold Israeli leaders accountable.”

Issam Younis, Director of Al Mezan added: “This is yet another instance of brazen injustice in Gaza’s story—another example of the dispensability of Palestinian children’s lives. First, the unlawful targeting of civilian children playing football on the beach, and then the purposeful whitewashing by Israel of the apparent war crime through its contrived legal system. There is no doubt as to the culpability of the perpetrators in the military, in the courts and in the government involved in this blatant cover-up. We will continue to challenge the state’s intentional shielding of perpetrators and seek justice on behalf of the Bakr children and their families internationally.”

Raji Sourani, General Director, The Palestinian Centre for Human Rights further commented: “The Israeli legal system, as illustrated by this case, provides full legal cover for organized systematic war crimes committed by the Israeli occupation army. The Palestinian victims we represent and their families deserve justice and dignity, and we will fight to bring justice through universal jurisdiction and the International Criminal Court. Recently, many states, including the United States and European countries took immediate action against Russian forces’ attacks on Ukrainian civilians, voicing their condemnation and imposing sanctions however, when Israeli forces kill Palestinians, those countries continue to back Israel. We have an obligation to ensure that the Baker children and all children, women, elderly and civilians, targeted and killed by Israeli forces are not forgotten.”