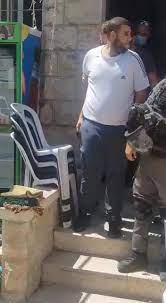 Murad Atiyeh on the day he was arrested at his home in Sheikh Jarrah.

They told WAFA correspondent that Atiyeh, who was detained at his home in Sheikh Jarrah neighborhood in occupied East Jerusalem on August 8 and remanded in prison for 22 times, was held and sentenced on classified charges. His lawyer was also banned from talking to the media about Atiyeh’s case following a court gag order.

His family believes Atiyeh was put away in order to silence him and others who speak out against the evictions in Sheikh Jarrah and other Palestinian neighborhoods in East Jerusalem facing a similar fate, such as Silwan and Wadi al-Joz.