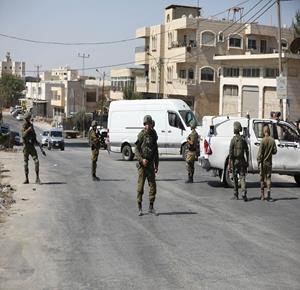 RAMALLAH, Thursday, September 09, 2021 (WAFA) – Clashes today erupted between Palestinian youths and Israeli occupation forces in several locations of the occupied West Bank as Palestinians continued for the second day in a row to demonstrate and clash with soldiers at contact points in support of the prisoners, according to local sources.

Demonstrations and clashes were reported in Arroub refugee camp, north of Hebron, the town of Dura, south of Hebron, and in al-Khader town, south of Bethlehem, all in the south of the occupied West Bank, said the sources.

Israeli soldiers fired live bullets, tear gas canisters and concussion bombs at the protestors, who pelted the soldiers, their military jeeps and watchtowers with stones.

The protests erupted over the last two days after the Israel Prison Services (IPS) took revenge against the more than 4000 Palestinian freedom fighters held in its prisons following the escape on Monday of six prisoners from the heavily fortified Gilboa prison in the north of Israel. The IPS harsh measures drew strong protests from the prisoners as well as Palestinians throughout the occupied territories.