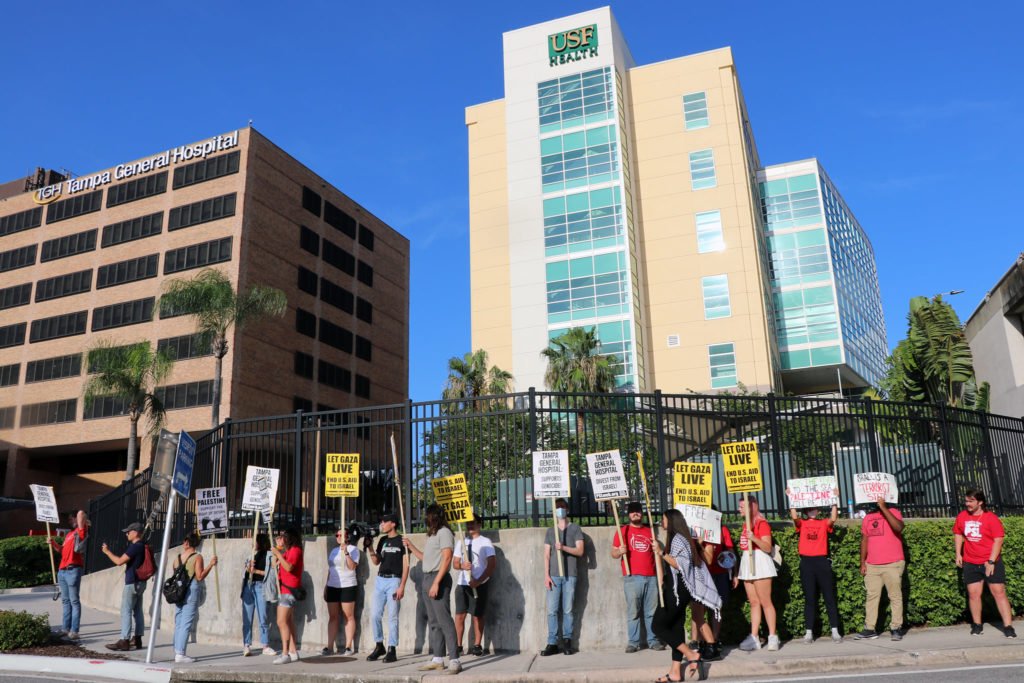 Seventeen US organizations, including Dream Defenders, Jewish Voice for Peace and the Florida Office of the Council on American-Islamic Relations, signed the online petition, “Denounce TGH for Israeli Partnership”, calling on Tampa General Hospital (TGH) to end its partnership with the Florida-Israel Business Accelerator (FIBA).

FIBA is an Israeli business investment program which connects Israel’s most high-potential tech startups to US partners, investors, and advisors they need to launch successfully in the U.S.

The signatories of the petition condemned “the renewed, but ever-present Israeli state aggression against Palestinians that span across Gaza, the West Bank, and Israeli territories,” and addressed “all doctors, nurses, and anyone who supports the mission of Tampa General Hospital, in which they state a shared purpose: “We heal. We teach. We innovate. Care for everyone. Every day.”  A statement that doesn’t hold its weight in recent light of a partnership made between Tampa General Hospital and the Florida-Israel Business Accelerator to expand and create cutting edge “solutions” to the physician’s office.”

They highlighted the fact that Israel, the occupying power, continues to dodge its responsibilities under international law.

“Not taking into account its responsibilities as an occupier under the Fourth Geneva Convention, Israel continues to deny Palestinians essential care, obstruct access to resources, and actively bombard healthcare infrastructure and roadways which is made possible through the financial aid supplied by the United States government, and institutions that legitimize Israel as a business partner,” they said.

“Not only has the aggression continued, but has been amplified in the midst of a global pandemic. As of May 15th, Israeli airstrikes bombed all roads leading to Al-Shifa hospital, the largest and central hospital of Gaza. As a result, the bleeding population of Gaza were blocked access to emergency workers, health care, and ambulances.”

“The following day, they targeted and flattened the Doctors without Borders trauma and burns care clinic. On that same day, they murdered Dr. Ayman Abu al-Ouf, head of internal medicine at Al-Shifa hospital, along with his family. The only COVID testing laboratory in Gaza was damaged by Israeli bombs, consequently all testing in Gaza has completely stopped. The flattening of apartments by Israeli airstrikes led to the displacement of over 74,000 citizens that had to flee and crowd in various schools, and UNRWA facilities overriding the set medical protocols of social distancing.”

They condemned Israel for committing medical apartheid by refusing to provide Covid-19 vaccines for the more than four million Palestinians living under its military rule while reminding TGH that it is investing “in the genocide and displacement of besieged Palestinians”.

“The depoliticization of healthcare as a site of neutrality showcases the continuous refusal to acknowledge health disparities that are caused by structural harms. The structures of colonialism, militarization, and capitalism perpetuate an erasure of an entire ethnicity in which this case are the Palestinians in the face of Israeli aggression. A statement that isn’t a hyperbole, or a belittlement but a well-documented fact by multiple international human rights organizations. Can Tampa General Hospital advocate for the advancement of health in its community, while it invests in the genocide and displacement of besieged Palestinians? Supporting and legitimizing Israeli businesses means supporting Israel’s moral degeneration and the ultimate destruction of millions of lives.”

They called upon U.S. health care systems, academic institutions and health care providers to allow faculty, staff, trainees and students in US institutions the freedom to “speak up about crimes committed against Palestine and the Palestinian people without fear of retribution, harassment or silencing from anyone within their respective institutions and circle of influence (including funders)” and “hold accountable any person or institution who attempts to penalize any faculty, staff, trainee or student for their advocacy for Palestine and its people.”

The signatories also called them to “adhere to the standards set forth by the Boycott, Divestment, Sanctions (BDS) movement and examine the ways in which ]US[ institutions and facilities (itemized by the United Nations) can uphold the demands of this nonviolent call issued by Palestinian civil society” including “ending any and all partnerships with Israeli institutions that coordinate with and benefit from the Israeli state’s oppression of the Palestinian people.”

They also called on US institutions “within the global medical and science community to pressure their governments to end aid to Israel and to condemn unequivocally Israel’s crimes against Palestine and the Palestinian people.”