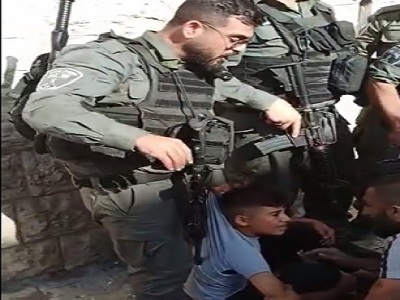 JERUSALEM, Sunday, May 30, 2021 (WAFA) – An Israeli Police vehicle today ran over and injured a Palestinian child for raising a Palestinian flag on his bike in the occupied Jerusalem neighborhood of Ras al-Amoud, according to witnesses.

Three Israeli police officers chased 15-year-old Jawad Abbasi who was riding his bike while raising a Palestinian flag, running over him and causing him bruises in the leg for raising the flag, which the occupation authorities ban in the occupied capital.

The child was briefly detained by the occupation forces for sometime before he was let go for medical treatment.