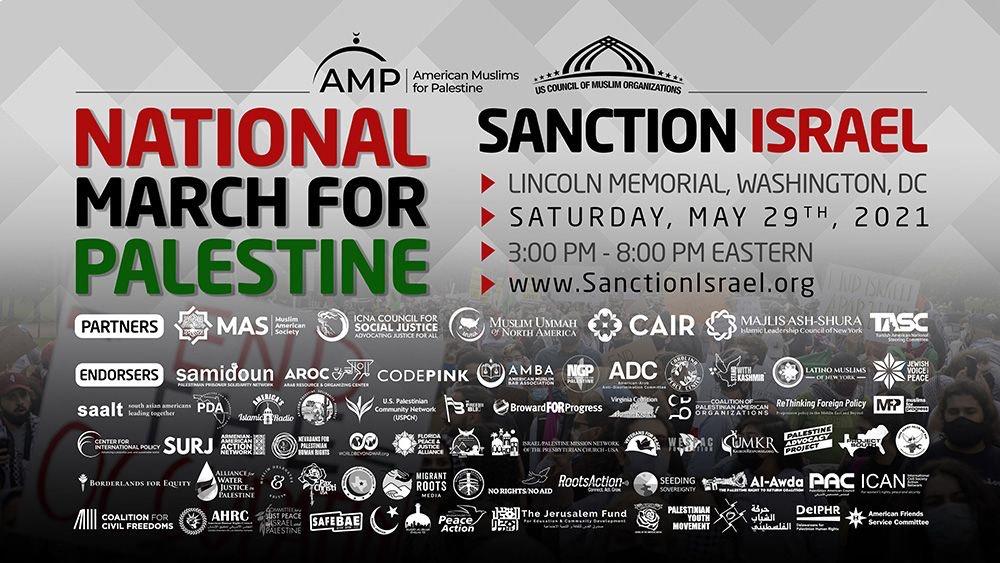 RAMALLAH, Friday, May 28, 2021 (WAFA) – US organizations are scheduled on Saturday to hold a march in Washington DC in protest of Israel’s settler-colonialism, apartheid and military occupation.

The pro-human rights grassroots organizations have issued online calls for mobilization for the National March for Palestine, which will be the largest protest in U.S. history supporting the Palestinian cause and is organized by dozens of Palestinian, interfaith, and various civil rights organizations and will take place at the Lincoln Memorial.

Their call for participation follows their successful mobilization of tens of thousands of Americans, who took to the streets in the past few weeks in many cities, including New York, Chicago, Texas and San Francisco, in protest of Israel’s onslaught on Gaza and encroachments upon Al-Aqsa Mosque.

Among those endorsing the event are Jewish organizations, namely the Jewish Voice for Peace and Jews for Palestinian Right of Return.

The march is a part of the new Sanction Israel campaign calling on the Biden administration and Congress to sanction Israel and stop giving it billions in U.S. tax dollars and military hardware, like the very same bombs that the Israeli government just used to obliterate entire Palestinian families in the Gaza Strip.

American Muslims for Palestine urged protestors to “go big and bold right now for Palestinian liberation now that a ceasefire has gone into effect,” and said: “No return to the status quo. It is time for Israeli settler-colonialism, ethnic cleansing, apartheid, military occupation, and blockade to be dismantled now!”

“The cease-fire is not enough. The U.S. needs to stop sending money to the government of Israel that has been displacing people for 73 years,” Roxana Bendezú, Pax Christi USA Program Director, stated.

Meanwhile, Faizan Syed, Executive Director of the Council on American-Islamic Relations called the US to end its support of Israel that is “illegally occupying and brutalizing Palestinians in Gaza and the West Bank”.

“We are proud to be part of the growing movement in America that is calling attention to crimes committed by Israel and working to end U.S. support for those crimes,” he added.

“I am a proud American-Palestinian, and I refuse to have my tax dollars fund illegal Israeli settlements, construction of the apartheid wall, human rights violations, and the killing of Palestinian children,” said Fadya Risheq, organizer of the bus delegation who will be traveling to D.C. “I’m going to D.C. to let my government know that it must immediately stop its support of Israel that continues to commit crimes against Palestinians”.