Palestinian injured in Israeli onslaught on Gaza succumbs to wounds 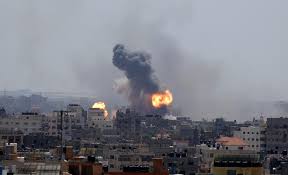 Above is a file photo for Israeli relentless bombardment of Gaza

GAZA, Thursday, May 27, 2021 (WAFA) – A Palestinian injured in the latest Israeli onslaught on the Gaza Strip Thursday overnight succumbed to his wounds, bringing the death toll to 254, according to WAFA correspondent.

Ahmad Kamel Ammar, a 32-year-old resident of al-Bureij refugee camp, succumbed to the critical wounds he sustained from the Israeli bombardment on the camp.

Ammar was one of the casualties evacuated to Al-Arish General Hospital in Egypt's North Sinai region for urgent treatment, however, he was pronounced dead.

The Health Ministry said the overall death toll of the latest onslaught reached 254, including 66 children, 39 women, 17 elderly persons in addition to 5 disabled persons.