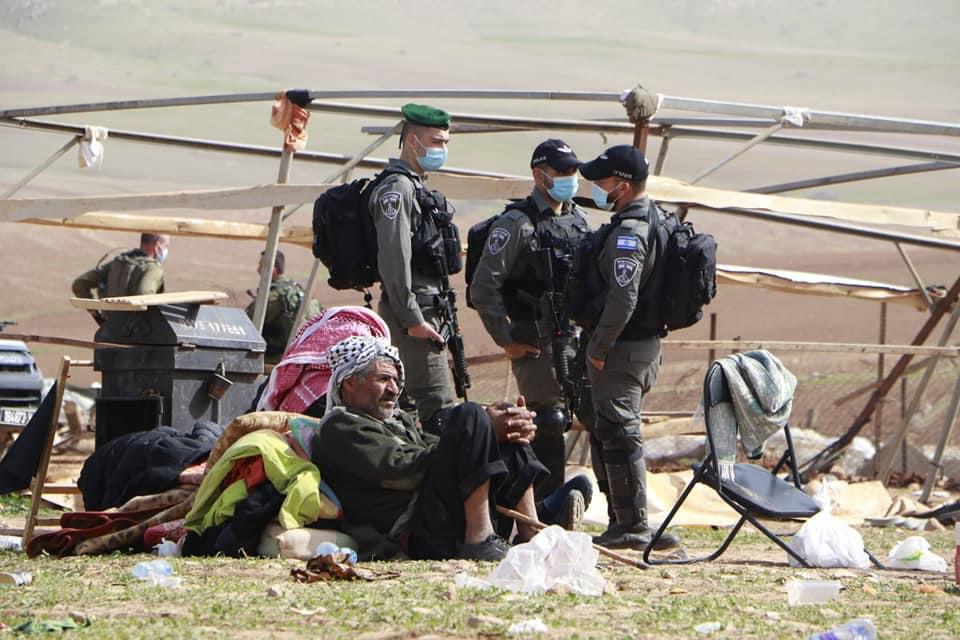 JERUSALEM, Saturday, March 06, 2021 (WAFA) – Citing the lack of building permits, Israel demolished or seized in the occupied territories in the period between 16 February and 1 March 35 Palestinian-owned structures, displacing 98 people, of whom 53 were children, and otherwise affecting about 60 others, according to a report by the United Nations Office for the Coordination of Humanitarian Affairs (OCHA).

It said in its biweekly Protection of Civilians report that on 22 February, the Israeli authorities confiscated another 18 residential and animal structures in Humsa – Al Bqai’a, a Palestinian Bedouin community in Area C of the occupied northern Jordan Valley in the West Bank, most of which had been provided as a humanitarian response to previous demolitions and confiscations; 10 households, comprising over 60 people, including 36 children, were again displaced.

Also in Area C of the occupied West Bank, a family of seven was displaced when their home was demolished in al Khader town near the southern West Bank city of Bethlehem, and the livelihoods of four families were affected by the demolition of vegetable stalls in Hijra, in the Hebron district.

In occupied East Jerusalem, said OCHA, 28 people were displaced in al-Isawiyya and Ras al Amoud neighborhoods when three houses were demolished by the Israeli authorities or ‘self-demolished’ by their owners under pressure from the Israeli municipality of West Jerusalem.

Obtaining an Israeli building permit in Area C of the West Bank is impossible, while in East Jerusalem it is close to being impossible forcing Palestinians to risk building on their lands without a permit.

Citing attacks by Israelis, OCHA said a 17-year-old Palestinian boy was injured in Sheikh Jarrah neighborhood of East Jerusalem by Israelis gathering to celebrate the Jewish Purim holiday. Israelis also stoned and damaged in the same context several cars belonging to Palestinians while traveling near the old city of Jerusalem and near Yitzhar settlement in the north of the West Bank.

Also during Purim celebrations, Israeli settlers tried to break into Palestinian houses in the old city of Hebron. In three separate incidents in Ramallah, several Palestinian-plated cars parked near Shilo settlement, and two trucks in Ein Samiya and Kafr Malik, were vandalized.

In another four incidents in Nablus district, houses were stoned and a water reservoir was damaged in Asira al Qibliya; fences surrounding agricultural land were vandalized in Burin; seven sheep were stolen in Jalud; and olive saplings were uprooted in Beit Dajan and Qaryut.

In Ein al Hilwe in the Tubas area in the north of the West Bank, a shepherd reported that a vehicle driven by settlers rammed into and killed five of his sheep. In a number of incidents, Palestinians reported that Israeli settlers had tried to take over Palestinian land in al Baqaa near Hebron and attacked herders in Kisan and a shop owner in Husan villages, both in the Bethlehem area, stealing money.

Israeli forces also carried out during the two-week reporting period 184 search-and-arrest operations and arrested 158 Palestinians across the West Bank. The Jerusalem governorate recorded the highest number of operations (60), mostly in East Jerusalem.