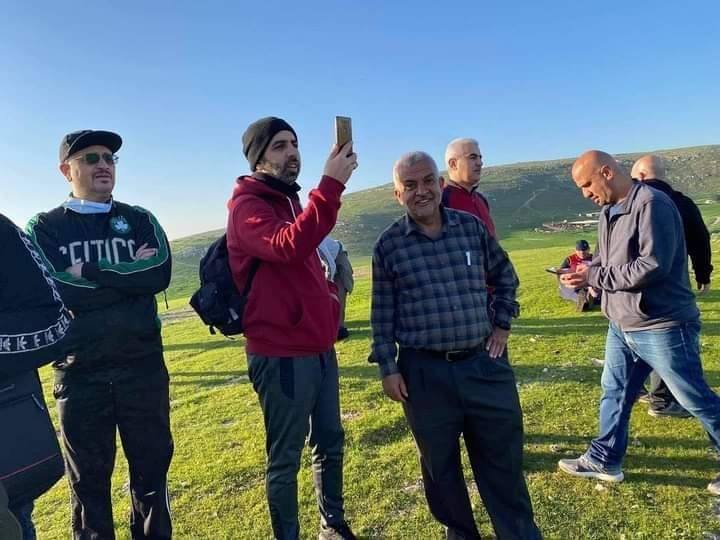 Bilal Bawatneh with his colleagues on a hiking trip.

RAMALLAH, Saturday, February 13, 2021 (WAFA) - Bilal Bawatneh, 52, from Ajoul village, north of Ramallah, was eager to visit the northern Jordan Valley because this would be the first time for him in that area. So he decided to join a group of 25 Palestinians going on a hike in an area threatened for takeover by the Israeli occupying authority.

Bawatneh used to participate in hikes for a long time, but he stopped it a year ago after he fell during the olive harvest season and suffered a broken hip. After healing, he decided to return to join the hikers yesterday on their trail in the northern Jordan Valley. He was so excited about it that when he found out that he did not have a place on the bus going there because he was late registering, he decided to follow the bus in his own car.

"He loved every moment of the trail. He spoke about the beauty of nature and the scenery and never seemed to be tired of the rough trail, which runs for about 10 kilometers," said Alaa Abu Qutaish, one of the hikers.

But this joy did not last for long. When the hikers reached Ain al-Bayda to take a short break after walking for about one hour, they were surprised by a vehicle driven by an Israeli settler driving like crazy and ramming into Bawatneh, killing him and injuring two other hikers.

Abu Qutaish did not believe what had happened. He would scream at Bawatneh, who did not respond. After a while, an Israeli ambulance arrived, which confirmed that Bawatneh was dead and that this hike would be his last.

"It was shocking. No one believed what happened," said Abu Qutaish.

"Bilal called me yesterday morning, telling me that he was going with us. We were happy about that. But since he registered late, there was no place for him on our bus. But he insisted on going and decided to drive his own car and followed us to the area." Abu Qutaish said that they have been going on hikes for years and that they have visited various regions in Palestine. They were harassed and often attacked by settlers, who seem to run wild in those areas, trying to prevent them from completing on the trail.

Sometimes, Israeli soldiers would join the settlers in attacking the Palestinian hikers and throw teargas and sound bombs at them.

"What happened for Bilal is a crime that proves, unequivocally, that we are not safe anywhere in our own country. We might be killed, arrested or injured and the reason is because we want to live freely in our homeland, enjoy its spring and sun, and drink from its water," said Abu Qutaish.

Bawatneh’s only son, Abdul Rahman, did not believe the news at first.

He called his father’s colleagues on the track who confirmed to him what happened. It fell like a thunderbolt on him.

"As if it was a dream. I did not believe that he was dead. Only yesterday we were sitting together and talking, He told me that he was going on a hike in the Jordan Valley. He was excited about that because he was going to visit that area for the first time. We did not know that this would be his last," said Abdul Rahman.

Bawatneh owned a shop for children’s games in Ramallah and another one for household items, and lived in al-Bireh city, attached to Ramallah. He is survived by a wife, three daughters and one son.