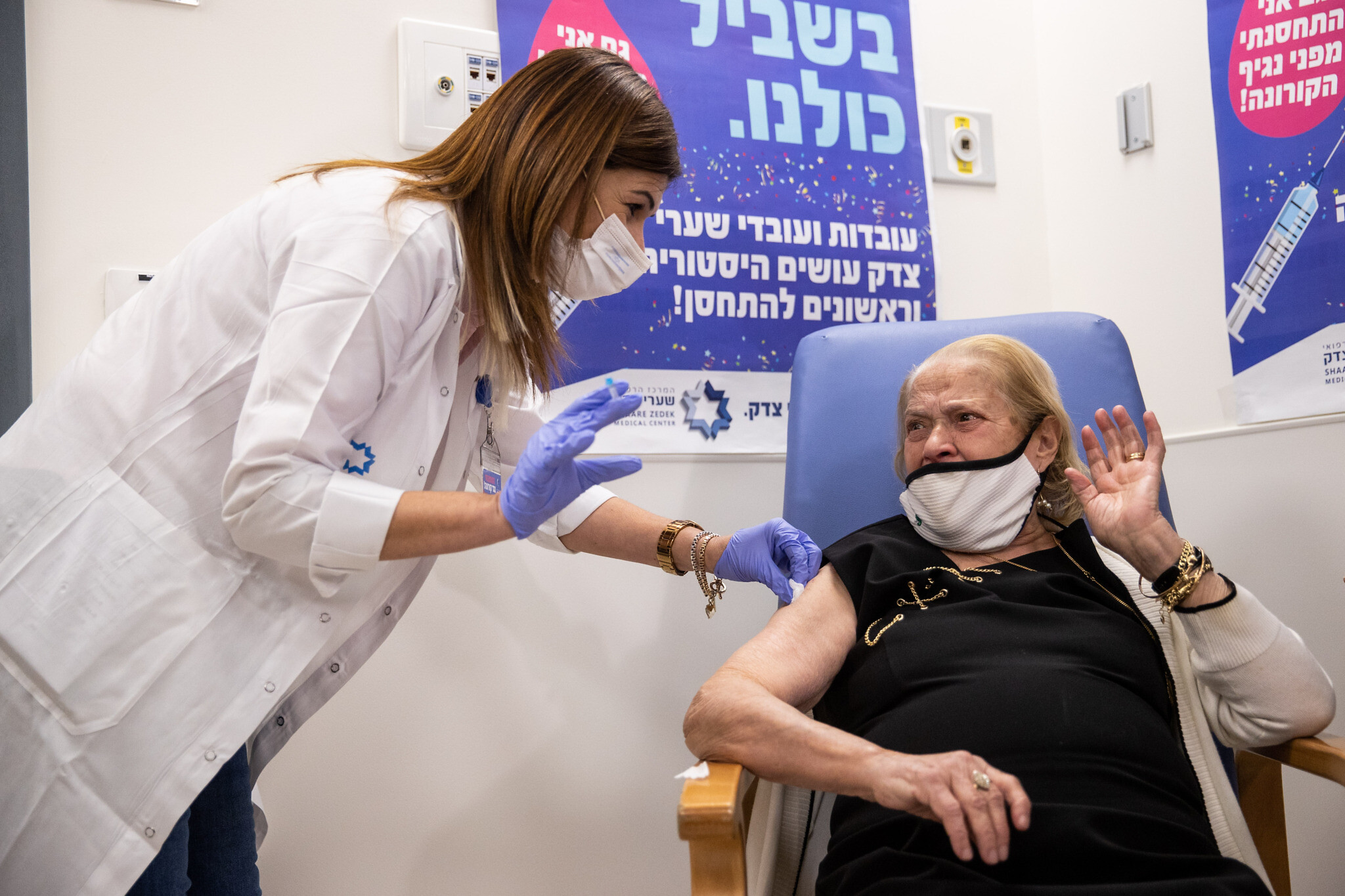 An elderly Israeli woman receives a Covid-19 vaccine, at the Shaare Zedek hospital in Jerusalem, on January 3, 2021.

LONDON, Thursday, January 07, 2021 /WAFA/ – The Israeli government must stop ignoring its international obligations as an occupying power and immediately act to ensure that COVID-19 vaccines are equally and fairly provided to Palestinians living under its occupation in the West Bank and the Gaza Strip, said Amnesty International yesterday.

"Israel’s COVID-19 vaccine programme highlights the institutionalized discrimination that defines the Israeli government’s policy towards Palestinians. While Israel celebrates a record-setting vaccination drive, millions of Palestinians living under Israeli control in the West Bank and the Gaza Strip will receive no vaccine or have to wait much longer – there could hardly be a better illustration of how Israeli lives are valued above Palestinian ones," said Saleh Higazi, Deputy Regional Director for the Middle East and North Africa at Amnesty International.

"Israeli authorities must ensure that vaccines are equally provided to the Palestinians living under their control, in order to meet their obligations under international law. They must also ensure smooth entry of vaccines and other medical equipment to the OPT, including making any necessary logistical arrangements to ensure the safety and effectiveness of these vaccines."

On December 23, the Israeli Health Ministry began the distribution of COVID-19 vaccines. Having already given initial jabs to more than a 10th of its population, Israel has been hailed as the country that has to date achieved the widest vaccination coverage in proportion to its population size. However, the COVID-19 vaccine roll-out plan so far covers only citizens of Israel, including Israeli settlers living inside the West Bank, and Palestinian residents of Jerusalem. It excludes the nearly 5 million Palestinians who live in the West Bank and Gaza Strip, under Israeli military occupation.

As per Article 56 of the Fourth Geneva Convention, Israel’s obligations include the duty of ensuring and maintaining "the medical and hospital establishments and services, public health and hygiene in the occupied territory, with particular reference to the adoption and application of the prophylactic and preventive measures necessary to combat the spread of contagious diseases and epidemics".

"The Israeli government must uphold its obligations as the occupying power, under international humanitarian law and human rights law, to provide the highest attainable standard of physical and mental health to the population of the OPT without discrimination," said Saleh Higazi.

"The views of marginalized groups must be at the forefront of any decision-making to ensure that national vaccine policies aren’t exclusionary or discriminatory. All states must confront existing inequalities to ensure everyone has access to vaccines."

On December 22, 10 human rights and health organizations issued a statement calling on Israel to ensure that its vaccination campaign includes Palestinians living under Israeli occupation.