For fifth week, thousands of Israeli demonstrators demand Netanyahu to step down 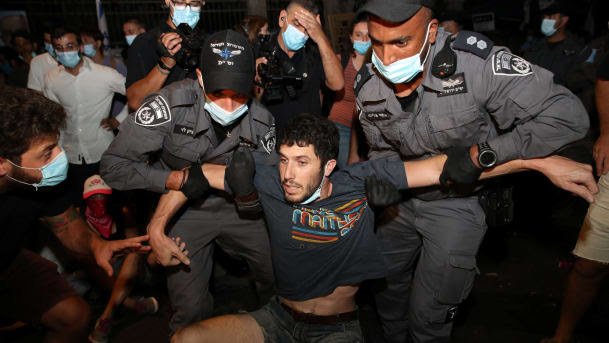 Police drag a protester from off the ground, Jerusalem, July 25, 2020

JERUSALEM, Sunday, July 26, 2020 (WAFA) - Thousands of Israeli protesters demonstrated in occupied Jerusalem and across Israel for the fifth week last night, demanding long-serving Prime Minister Benjamin Netanyahu to step down over corruption charges as well as his failure to handle the coronavirus pandemic.

In occupied Jerusalem, demonstrators marched through the Paris Square and outside Netanyahu's residence, where mass anti-Netanyahu protests were witnessed in recent weeks. An Israeli occupation police spokesman told Israeli reporters that around 5,000 demonstrators were at the site of the protest which began at around 8 pm and continued until 11 pm.

Protests were also staged in Tel Aviv, Caesarea and other locations, especially at major junctions, highway overpasses and other areas across the country, in what appeared to be the largest yet demonstration of a growing protest movement seeking Netanyahu’s resignation.

In Jerusalem’s Paris Square, which has been the center of the protest movement, police allowed protesters to remain until around 1 a.m. but then began forcing them out, dragging activists off the street one by one and eventually deploying two water cannons against the remaining group that refused to leave.

Following what some have described as a hasty reopening of the country's economy in May, new daily infections in Israel have spiked to an average of 2,000 a day.