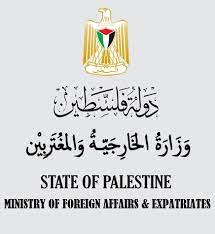 RAMALLAH, Tuesday, November 22, 2022 (WAFA) – The Foreign Affairs and Expatriates Ministry today condemned the demolition notice issued against a school which is under construction in the Masafer Yatta region, south of Hebron, in the occupied West Bank.

The Ministry said in a press release that it condemns in the strongest possible terms the demolition notice issued by Israel, the occupying power, for Isfey al Fauqa school located in Area C, northeast of Masafer Yatta, and considers this decision as an extension of the Israeli colonial war against the Palestinian presence in those areas and other areas classified (C) with the aim of marginalizing them as a prelude to controlling the land and allocating it to colonial settlements.

Before the school’s existence, students were forced to travel to the nearby Khirbet Al Fakheit or to Khirbet Al Majaz communities, located at least 4 km away from Isfey. Such a journey is exacerbated by the harassment of violent settlers and the absence of roads forcing children to walk through dirt paths, which become inaccessible during the rainy season, the statement read.

It called for the immediate termination of the forcible transfer of Palestinian civilians from the region.

“The forcible transfer of civilians from, or within, the oPt is absolutely prohibited under international humanitarian Law. Israeli authorities should halt all coercive measures including planned evictions, demolitions, and military training in residential areas,” it said.

The Ministry held “the Israeli government fully and directly responsible for the results and repercussions of this crime”, while expressing its belief that “the international community and the European Union’s statements of condemnation and denunciation of the demolition orders targeting schools, homes and facilities are insufficient and do not constitute as real pressure on the occupation authorities to stop this crime.”

The Ministry called on “the international community to hold Israeli officials accountable for their gross violations of international legitimacy, its resolutions, and international humanitarian law, and to link the relationship with Israel to the extent of its commitment to international law and United Nations resolutions on the Palestinian cause.”

On November 17, the Israeli occupation army issued an order to demolish the three-classroom school and informed the residents of the order.

In May, Israel’s top court gave the army the green light to forcibly expel some 1,300 Palestinians living in twelve villages or hamlets making up the Masafer Yatta area, which relies heavily on animal husbandry as the main source of livelihood, marking one of the largest expulsions carried out by the State of Israel in recent decades.