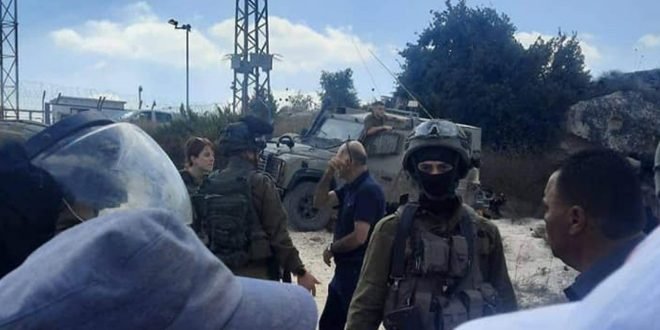 TULKARM, Monday, August 15, 2022 (WAFA) – Israeli forces today cracked down on an anti-colonialism rally close to Beit Lid town, southeast of Tulkarm city in the north of the West Bank, according to WAFA correspondent.

She said that Israeli forces forcefully dispersed a rally called to protest the installment of tents and mobile homes by settlers at Abu Louka Mount, adjacent to the Enav colonial settlement.

She added that settlers, under military protection, prevented landowners from the cluster of Kafr al-Labad village, Beit Lid town and Saffarin village, east and southeast of the city, from reaching the Mount at gunpoint as a military vehicle attempted to run over Palestine TV photo/video journalist Fadi Jayyousi while covering the protest.

Maen Rashed, a landowner, said that the protest was organized after settlers yesterday erected mobile homes at the 80-dunum olive-planted mount, which is privately owned by the villagers of the aforementioned villages and town.

He pointed out that the settlers’ move is part of a colonial scheme intended to seize the mount and connect the illegal Enav and Avnei Hevetz colonial settlements with one another.