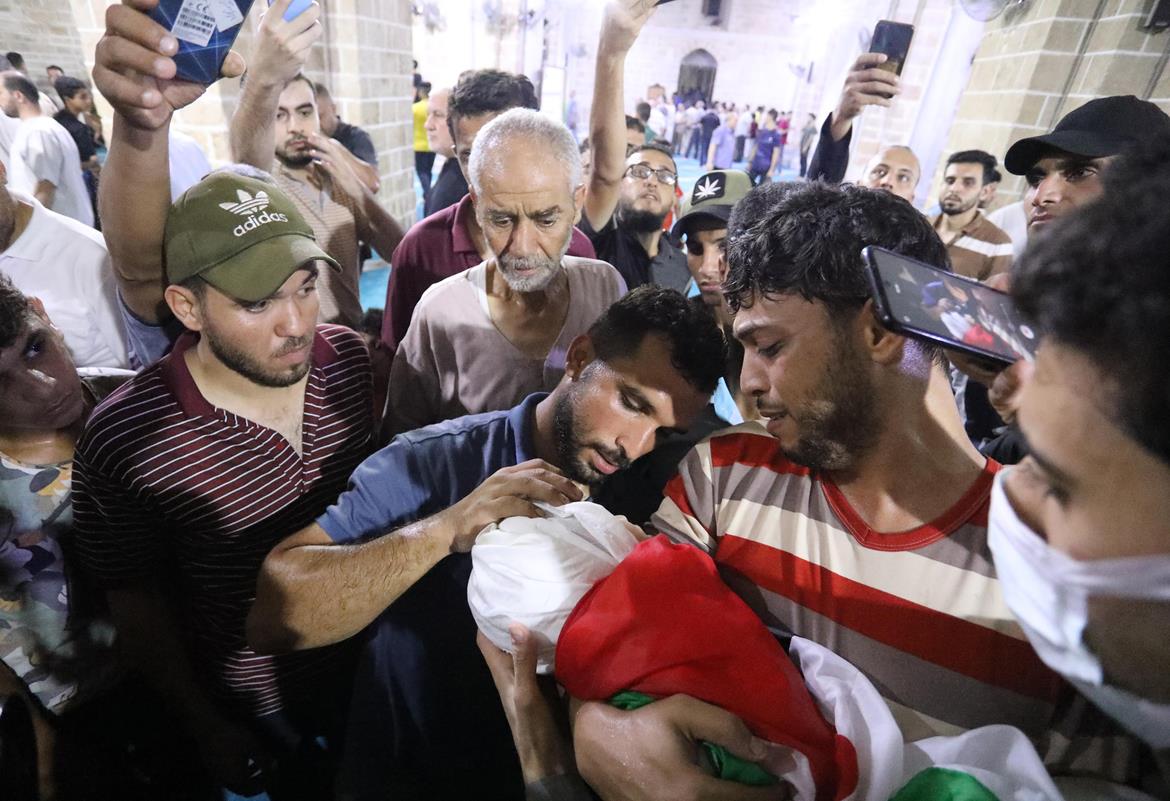 Family mourning their 5-year-old baby girl killed on the first day of the Israeli airstrikes on Gaza. (WAFA Images)

AMMAN, Sunday, August 7, 2022 (WAFA) - The Norwegian Refugee Council (NRC) today urgently called on all parties to refrain from targeting civilians and work towards an immediate ceasefire, following Israel’s assault on Gaza that began on Friday.

At least 31 Palestinians have been killed since the escalation of hostilities, including a five-year-old girl killed in an Israeli airstrike on Khan Younis, southern Gaza.

“Every single escalation of violence in Gaza comes at the cost of ordinary people, who pay the highest price for military actions. We urge all parties to protect civilians by all means, put an end to hostilities and work towards an immediate ceasefire,” NRC’s Middle East Regional Director Carsten Hansen said.

Israeli airstrikes on Gaza began Friday afternoon and were met with retaliatory rocket fire from Gaza into Israel.

“Innocent children and families have been caught up in the vicious circle of violence for as long as they can remember. Many in Gaza are still recovering— both psychologically and physically — from last year’s eleven-day crisis,” said Hansen.

Israel closed the Erez/Beit Hanoun civilian crossing and Kerem Shalom/Karm Abu Salem commercial crossing in the Gaza Strip on 2 August, stopping the entry and exit of people and goods, including fuel, necessary to operate Gaza’s sole power plant, which was forced to cease operation on Saturday. The electricity supply in Gaza is expected to be only four hours per day, said NRC, calling on Israel to immediately allow the flow of fuel and other goods to enter Gaza.

“The repeated cycles of violence only entrench the conflict further, without addressing its root causes including lifting Israel’s 15-year blockade of Gaza and ending its occupation of Palestinians,” said Hansen.

Parties must cease fire at once as international law prohibits the use or threat of force, except in self-defense. Under international humanitarian law (IHL), an occupying power can only use lethal force against civilians as a means of last resort when facing an imminent threat of death or serious injury. Pre-emptive strikes, like the ones launched by Israel, are inevitably acts of aggression, and may amount to a grave breach of IHL, including willful killing or causing of serious injury to body or health, said NRC.

Under IHL all parties must take all necessary precautions to protect civilians and refrain from targeting civilians and civilian objects, it stressed.