The Ukraine crisis and the double standards of the global community 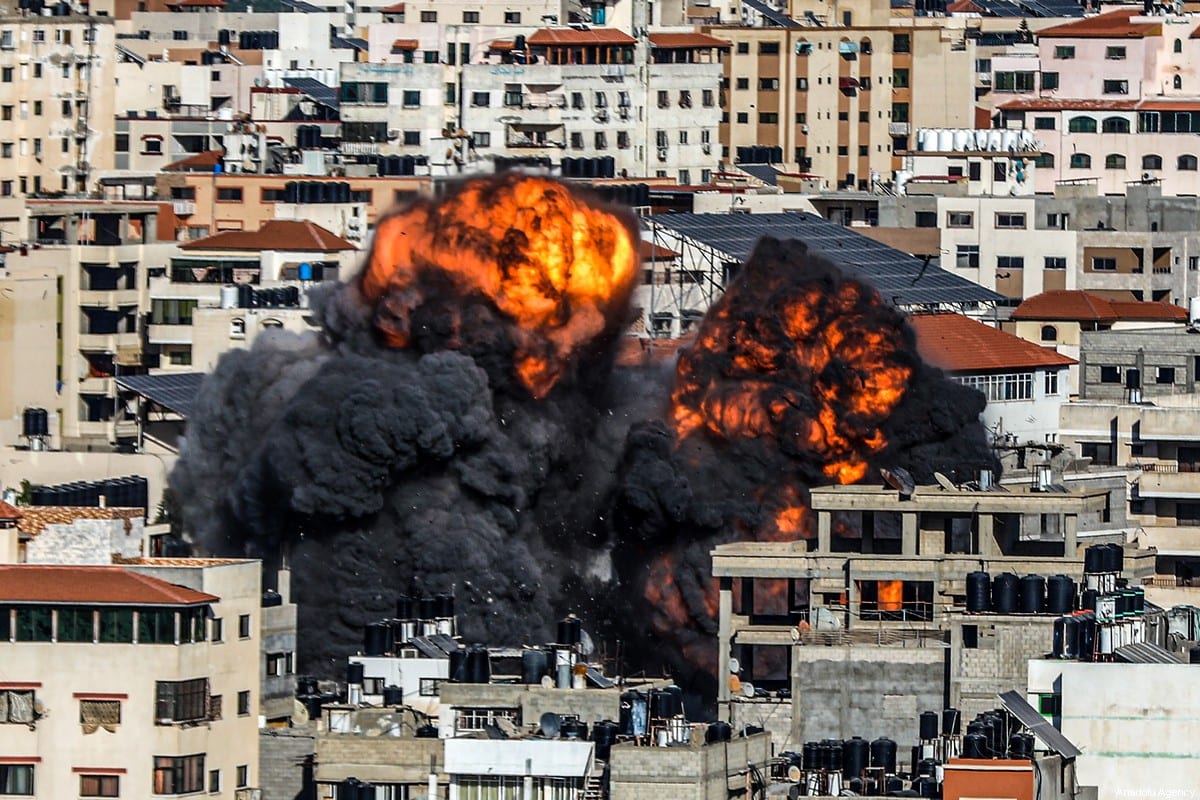 An Israeli airstrike hits a residential building in Gaza, May 2021

RAMALLAH, Saturday, March 05, 2022 (WAFA) – Western leaders have been busy over the last ten days showering social media and media outlets with hi-flying rhetoric condemning Russia and holding it responsible for starting a military aggression against Ukraine that would push the entire world into the unknown.

While many countries began to ready their equipment to send it east towards Ukraine to uphold its response to the Russian military operation, some European countries decided to impose economic sanctions on Russia and many of its officials and diplomatic, economic and media institutions.

Soon after, US and European officials called for an emergency meeting of the UN Security Council to discuss the crisis, while NATO leaders rushed to discuss potential sanctions and a unified response.

The US State Department and European foreign ministries have also warned of a global escalation, and affirmed their determination to double their security, diplomatic and humanitarian assistance to Ukraine, pledging to send more troops to eastern Europe to ensure protection to the Ukrainian people.

US President Joe Biden also issued a statement accusing his Russian counterpart Vladimir Putin of having premeditated a war that would lead to heavy loss of life and a fresh wave of human suffering, vowing that Washington and its allies would respond to Moscow in a unified and decisive manner.

These events do not summarize the overall positions taken globally regarding the Russian-Ukrainian crisis. Rather, they are a short briefing of the dramatic developments that occurred during the first seven hours of dawn on Thursday, February 24, before the first explosion that hit the north of the Ukrainian capital Kyiv was heard marking the start of the Russian military operation.

These Western positions pushed many politicians, analysts, influential figures and commentators into describing the situation as outspoken hypocrisy and double standards.

In a video that went viral on Twitter, Irish lawmaker Richard Boyd Barret said,  “Palestinians are treated as an inferior race. Denied access to food and water. And yet no sanctions on Israel for its apartheid regime. Utter hypocrisy.”

He added, “And yet you want to be careful about your language… But you will not use the same strength of language when it comes to describing the Israeli treatment of the Palestinians when it is now being documented and detailed by two of the most respected human rights organizations in the world.”

American actress Angelina Jolie also posted on Instagram. “Regardless of their nationality or race, all refugees and displaced people deserve equal treatment and rights.”

“Before a single Ukrainian refugee crossed the border, there were already more than 82 million people forced from their homes globally — the highest number on record,” she continued. “They include over 6 million Syrians — the world’s largest population of refugees — who’ve been displaced for over a decade already.”

British politician and former MP George Galloway wrote on Twitter, “Supermarkets removing Russian food and drinks having refused to remove Apartheid State products on the grounds that this would be “political” are disgusting hypocrites.”

He said in another tweet, “I don’t think the majority here have ANY idea of the total outrage amongst people of the same color and religion of victims of recent and even ongoing wars waged by the total hypocrites in charge of our country and its media. NONE of what is happening now was allowed for them.”

“From football flag-waving to supermarket shelves. From bans & cancellations to witch-hunting. Victims in Yemen Iraq Afghanistan Gaza Palestine Lebanon Syria are not “civilized”... This hypocrisy has a price.”

British journalist Richard Medhurst also retweeted a post by Welsh journalist Jeremy Bowen in which he posted a picture teaching Ukrainians how to make Molotov cocktail. Medhurst commented, “If this graphic was to teach Palestinians how to take out Israeli tanks, or Iraqis to take out American tanks, it would be called “terrorism” and taken off Twitter.”