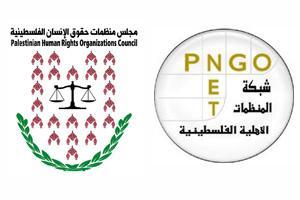 The six targeted organizations are: Addameer Prisoner Support and Human Rights Association, Al-Haq Law in the Service of Man (Al-Haq), Bisan Center for Research and Development, Defense for Children International-Palestine (DCI-P), the Union of Agricultural Work Committees (UAWC), and the Union of Palestinian Women’s Committees (UPWC).

“The arbitrary designations target six of the most eminent Palestinian CSOs and human rights defenders engaged in critical human rights work in the Occupied Palestinian Territory (OPT), including the documentation and monitoring of human rights violations, accountability work to prosecute Israel’s war crimes and crimes against humanity, and legal and advocacy efforts to bring Israel’s occupation, settler-colonialism and apartheid regime to an end,” they said. “The designations represent an unprecedented and ominous attempt by the Israeli occupying authorities to silence and criminalize Palestinian CSOs that challenge Israel’s prolonged military occupation, entrenched settler-colonization and apartheid of Palestine.”

They added: “Notably, the use of purposely vague and baseless ‘anti-terrorism’ legislation to criminalize the six organizations under Israeli domestic law follows years of sustained and systematic campaigns and attacks against Palestinian CSOs, to stymie their human rights documentation and cooperation with international and United Nations (UN) human rights mechanisms. On 19 August 2021, the UN Special Rapporteur on the situation of human rights defender, Mary Lawlor, issued a statement addressing multiple prominent cases of arbitrary arrests, harassment, criminalization, and threats against human rights defenders in the OPT.”

They said: “The following designations reflect decades of Israeli attempts to control the Palestinian people and serve to further muzzle and decimate the independent functioning of Palestinian CSOs. In particular, the designations represent an egregious and unlawful application of Israeli domestic law to the OPT, in violation of Article 43 of The Hague Regulations (1907) and the Palestinian peoples’ internationally-enshrined and inalienable right to self-determination.”

Noting the gravity of the current situation and imminent risks faced by Palestinian humanitarian actors and Palestinian human rights defenders, PNGO and PHROC urgently called on the international community, including third States, civil society organizations, human rights defenders, the United Nations, and the broader public, to demand that Israel revoke its designation of “terrorist organization” against the six leading Palestinian CSOs and to urge Israel “to cease the employment of illegal practices and policies of intimidation and harassment, including the arbitrary criminalization, harassment, and repression of Palestinian CSOs, which violate fundamental conventions under international law.”

The also called on the international community to issue a public statement of non-recognition of the designations as “an internationally wrongful act of apartheid, comprising legislative measures calculated to breach the right to freedom of opinion and expression, and the right to freedom of peaceful assembly and association,” to condemn the designations as “an unlawful application of Israeli domestic law to the occupied Palestinian territory;” and to condemn “the arbitrary designations and intimidation tactics, and to publicly reiterate their support of the Palestinian civil society organizations.”