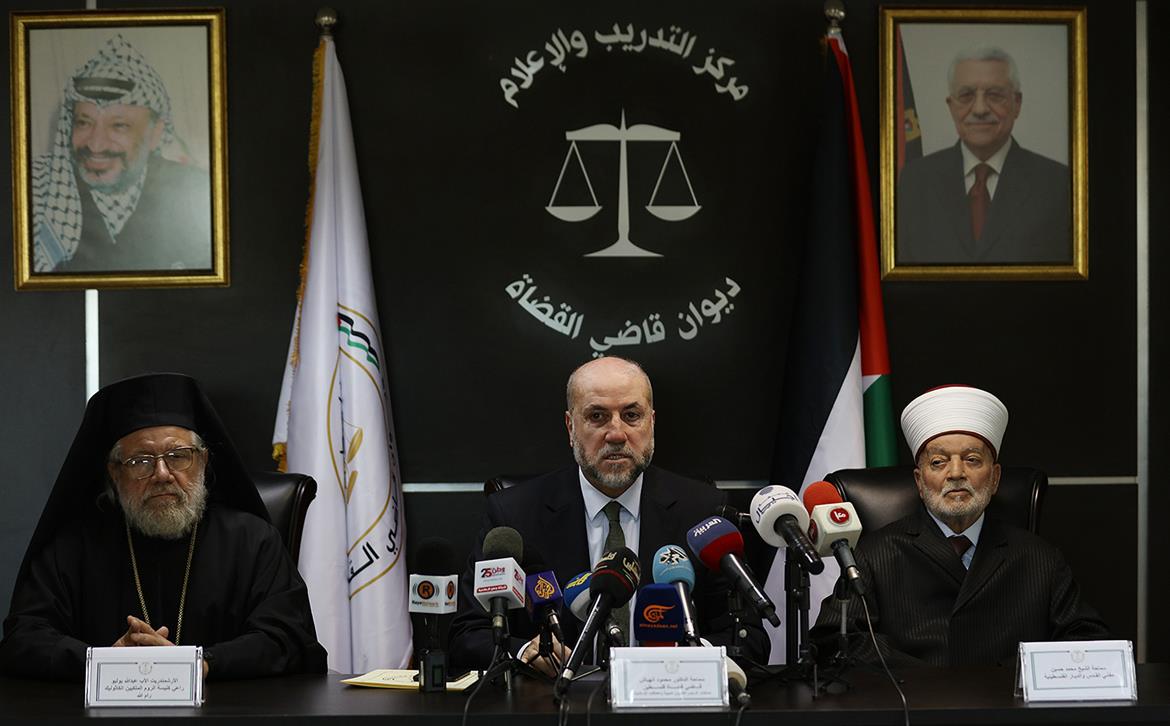 RAMALLAH, Thursday, October 7, 2021 (WAFA) – Muslim and Christian religious leaders today condemned an Israeli court’s decision allowing Jews to hold silent prayers inside the walls of Al-Aqsa Mosque compound in Jerusalem’s Old City, stressing that Israel has no right to interfere in the affairs of the Muslim holy place.

Palestine’s Chief Islamic Justice, Mahmoud Habbash, told a press conference held in Ramallah in the presence of the Grand Mufti of Jerusalem and the Palestinian Territories, Muhammad Hussein, and the head of the Melkite Roman Catholic Church in Ramallah, Father Abdullah Youlyo, that the court decision allowing Jews to hold silent prayer at Al-Aqsa Mosque is “a very dangerous decision, a new aggression against Al-Aqsa Mosque, and a flagrant violation of international law.”

He stressed that "Al-Aqsa Mosque is a purely Islamic place” and that the Israeli courts “do not have any right or authority to interfere in the affairs of the Mosque.”

He warned that “this Israeli behavior could open the door wide to the outbreak of a dangerous and destructive religious war that will not stop at the borders of Palestine and the region.”

The Mufti Mohammad Hussein also affirmed that Al-Aqsa Mosque is part of the Islamic faith and that no other party has any jurisdiction over it in any shape and form.

“Whatever the court, regardless of its level, decides is categorically rejected,” he said.

"We view with extreme gravity this aggression and interference by the Israeli courts against Al-Aqsa, and any decision related to Al-Aqsa is null and void, rejected by every Muslim in this world and every free person who believes in respecting the beliefs of others, and rejected by international law," said the Mufti.

Youlyo also stressed the rejection of the churches of any act against Muslim and Christian holy places, foremost of which is Al-Aqsa Mosque.