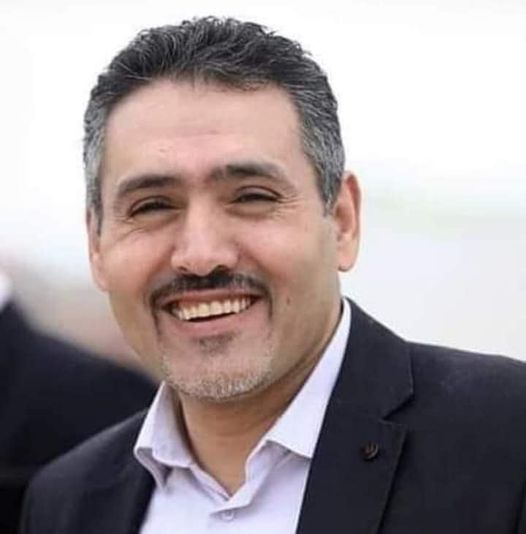 Nidal Ardah, a medical doctor, who was detained by Israeli forces as part of the massive manhunt for the escapees

RAMALLAH, Wednesday, September 08, 2021 (WAFA) – Israeli forces Wednesday overnight detained five relatives of the Palestinians who managed to escape from an Israeli prison from the northern West Bank district of Jenin, according to the Palestine Prisoner’s Society (PPS).

PPS said in a press release that Israeli forces launched a large-scale detention and inspection campaign in Jenin district in search of six prisoners who recently managed to escape from the highly-fortified prison of Gilboa through a tunnel.

Israeli soldiers rounded up Yacoub Infaat after breaking into and ransacking his house in Ya‘bad town, west of Jenin. Infaat’s son, Munadil, was one of the six prisoners who managed tunneled themselves out of the Israeli prison.

Soldiers barged their way into Arraba town, southwest of the city, where they detained four others, all members of the Ardah family.

Among the detainees were Radad and Shadad Ardah, whose brother, Mahmoud, was one of the escapees.

They also included Bassem Ardah, whose brother, Muhammad, was also one of the escapees, in addition to Nedal Arda, a medical doctor.

The detention of Nedal, who works as an officer at the Health Ministry’s Complaints Unit, prompted Health Minister, Mai Alkaila, to slam his detention and the intimidation of his family.

“The Israeli occupation deliberately inflicts violence on the Palestinian people in violation of international norms, laws and conventions,” Alkaila stressed as she called on all human rights organizations to immediately intervene to secure Nedal’s release.

This came as Israeli forces launched a house-to-house search campaign in Arraba plain in addition to several towns, including Arabbuna and Anin.

Dozens of heavily-armed soldiers barged their way into Arraba plain, and conducted extensive searches in Palestinian lands and communities in addition to the vicinity of all villages and towns close to the illegal apartheid wall.

They stormed Arabbuna village, northeast of Jenin, where they ransacked dozens of homes, turning them topsy-turvy.

They also forced their way into Anin village, west of the city, conducting massive searches of homes and farmlands located along the section of Israel’s apartheid wall.

Similar raids were reported in Faqqu‘a and Bir al-Basha villages.

Six Palestinian prisoners, managed to escape from Gilboa Prison on Monday overnight through a tunnel in what was described as the most dramatic and unprecedented prison break, particularly that Gilboa, which was built in 2004 during the Second Intifada, is considered one of Israel’s most impenetrable prisons. Israelis have nicknamed it “the safe”.

Five of the escapees are members of the Islamic Jihad and the other is a member of Fatah.