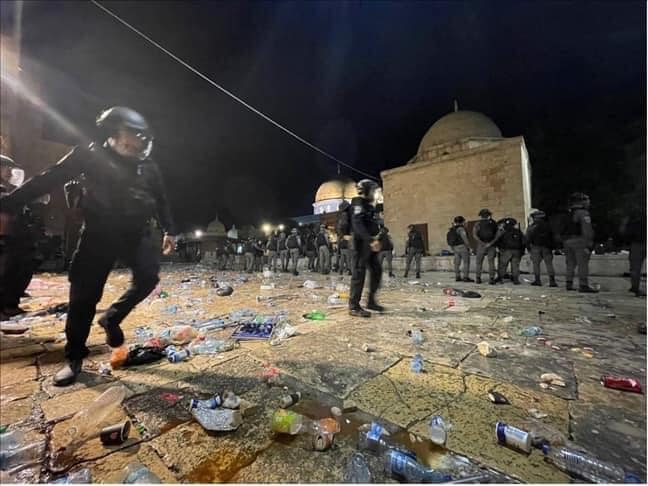 RAMALLAH, Monday, May 10, 2021 (WAFA) – The Palestinian Human Rights Organizations Council (PHROC), which represents 14 non-governmental organizations, today called on the international community to assure an immediate halt to Israel’s aggression against Palestinians in occupied East Jerusalem, warning the use of force could lead to further escalation on the ground.

Since dawn of today, Israel and its occupying forces have escalated their attacks against Palestinians in Jerusalem, and specifically against worshipers inside Al-Aqsa Mosque, they said in a statement.

Storming Al-Aqsa Mosque compound, where some 20,000 Palestinians were present for Al-Fajr (dawn) prayer, the Israeli occupying forces fired rubber bullets, tear gas canisters, and sound bombs, targeting Palestinians, while preventing the entry of the Red Crescent medical teams into the compound, where dozens are wounded, some in serious condition. Paramedics and journalists are among the injured.

“Considering the escalation in aggressions against Palestinians in the past few weeks, which continue to rapidly increase, and Israeli settlers’ intention to storm Al-Aqsa Mosque compound, we warn that Israel’s use of force will lead to a further escalation in attacks against Palestinians, and urge the international community to take immediate and concrete measures to halt Israel’s attacks,” said PHROC.

“Israel’s oppression and fragmentation of the Palestinian people, systematic use of excessive force, collective punishment and arbitrary arrests policies, along with settler violence, which is carried out with institutionalized impunity, are a few characteristics of Israel’s settler-colonial and apartheid regime,” it added.

The PHROC said that given the latest escalations in Israel’s attacks against Palestinians, specifically Palestinian Jerusalemites, “we warn that Israel’s use of force will lead to a further escalation in attacks against Palestinians. By failing to take immediate and direct actions to halt Israel’s oppression of Palestinians, not only will the very structure of international legal order be assaulted, but Palestinians, enduring, and frustrated by, decades of Israeli settler-colonialism and apartheid regime, will continue to face systematic and intensified attacks by the Occupying Power. Words of condemnation are not enough. Israel’s long-established unlawful policies will not come to an end as long as the international community does not have the political will to take concrete actions, including by sanctioning Israel, in order to hold Israel accountable for its breaches of international human rights and humanitarian law.”