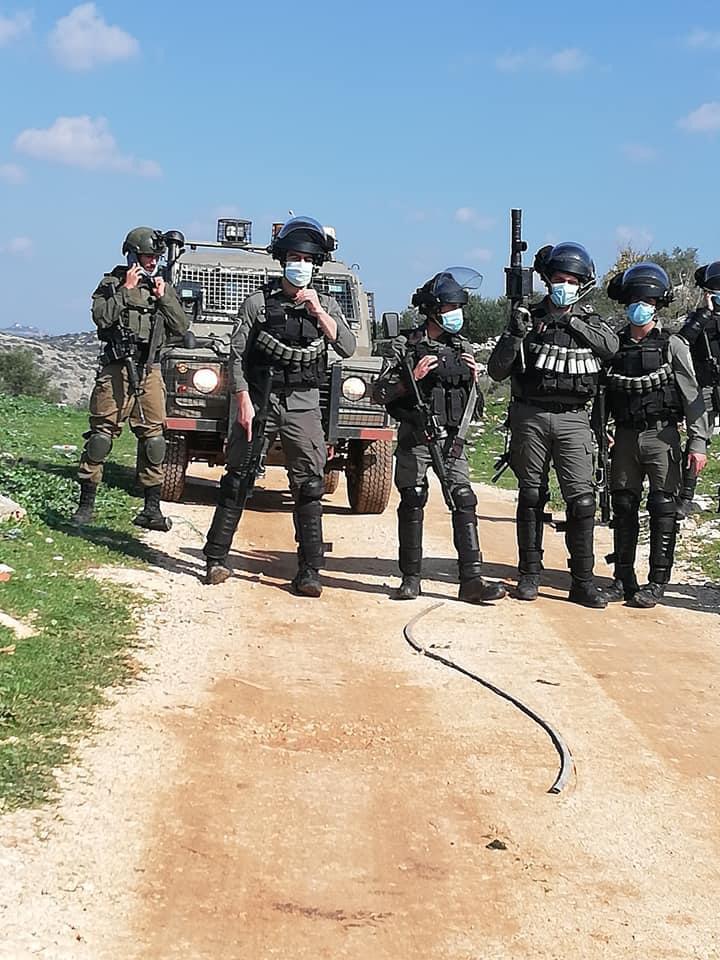 Israeli occupation soldiers getting ready to attack the tree-planting activity in Bidya.

SALFIT, Saturday, February 6, 2021 (WAFA) – Israeli occupation soldiers today attacked dozens of Palestinian farmers and activists who were planting trees in lands in the northern West Bank town of Bidya, west of the city of Salfit, and fired teargas canisters and stun grenades at them to force them to leave the area, according to a Palestinian official.

Walid Assaf, head of the Wall and Settlements Resistance Commission, told WAFA that soldiers fired teargas canisters and charged the activists while they were planting trees in Bidya, causing several suffocation cases and bruises.

He said the soldiers prevented the tree-planting activity called for by the Commission in order to help the Palestinian residents of Bidya protect their lands from Israeli takeover for its illegal settlement purposes.

He said a settler had set up a caravan on Bidya land with the purpose to establish a settlement outpost as residents and activists intervened to prevent the stealing of the land.

The army intervened to protect the settler by preventing the Palestinian landowners from reaching and planting their lands, said Assaf.

"We will do whatever is necessary and by all means to prevent the establishment of the settlement outpost and kick out the settlers from this place," he said, pledging to continue with the tree-planting activity in that land to protect it.

Soldiers also attacked another tree-planting activity in the village of Beit Dajan, east of the northern West Bank city of Nablus.

Salim Abu Jash, a local activist, said soldiers charged the farmers and activists who were trying to plant 400 olive saplings in the threatened land and fired teargas and rubber bullets at them causing several injuries and suffocation cases.