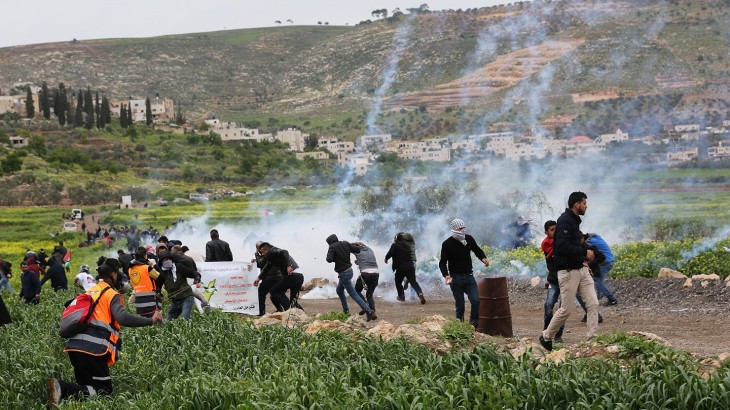 Hundreds of protesters were taking part in a rally following the weekly Friday prayers in Beit Dajan in protest of Israel's confiscation of large swathes of Palestinian land for the benefit of a colonial settlement outpost near the village.

The protesters were met with brutal force, and Israeli soldiers fired teargas canisters and stun grenades to disperse the protest causing many cases of suffocation from teargas inhalation. The injured were treated at the scene by local medics.

The area has been witnessing weekly protests over the past two months against Israel's ongoing theft of Palestinian land for the benefit of the colonial Israeli settlement construction and expansion.

Meanwhile, several Palestinian protesters sustained suffocation from teargas when Israeli occupation forces assaulted hundreds of protesters taking part in the weekly nonviolent protest in the village of Deir Jarir, northeast of Ramallah, against Israel's plan to build a new settlement outpost in the area.

Ayman Alawi, mayor of the village, told WAFA that Israeli soldiers fired rubber-coated bullets and teargas canisters at the protesters to disperse them, causing many cases of suffocation from teargas inhalation.

Two weeks ago, Israeli settlers set up a tent and embarked on digging and construction works in the area in a prelude to establish a new colonial settlement outpost on Palestinian land.

The village has been a frequent target of recurrent attacks by Israeli occupation forces and colonial settlers over the past few months.