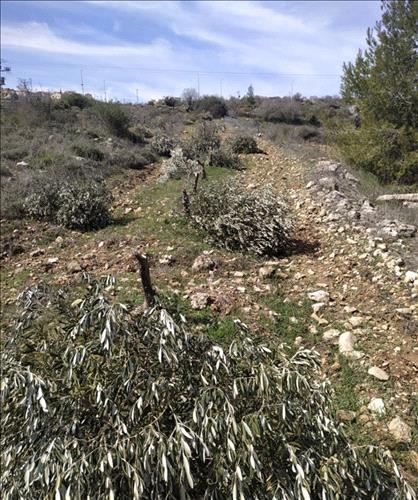 RAMALLAH, Thursday, December 17, 2020 (WAFA) – In part of the Israeli war against Palestinian trees, settlers today uprooted hundreds of olive saplings in Kisan village, east of southern West Bank city of Bethlehem, according to a local official.

Head of Kisan village council, Ahmad Ghazzal, told WAFA that settlers from the illegal settlement of Ibei Hanahal uprooted and seized 250 olive saplings a local villager planted two weeks ago in his land west of Kisan.

The saplings’ vandalism came one day after Israeli settlers from the same illegal settlement attacked Palestinian shepherds while herding in the open pastures as their dogs attacked the sheep. The settlers then chased the shepherds into the village and pelted homes with stones before they were confronted by the residents and pushed out of the village.

Located 11 kilometers to the south of Bethlehem city, Kisan has a population of some 600 and once occupied a total area of 133,330 dunums before the Israeli occupation authorities seized almost all of its land for its settlement activities, settlers’ bypass roads and its apartheid wall.