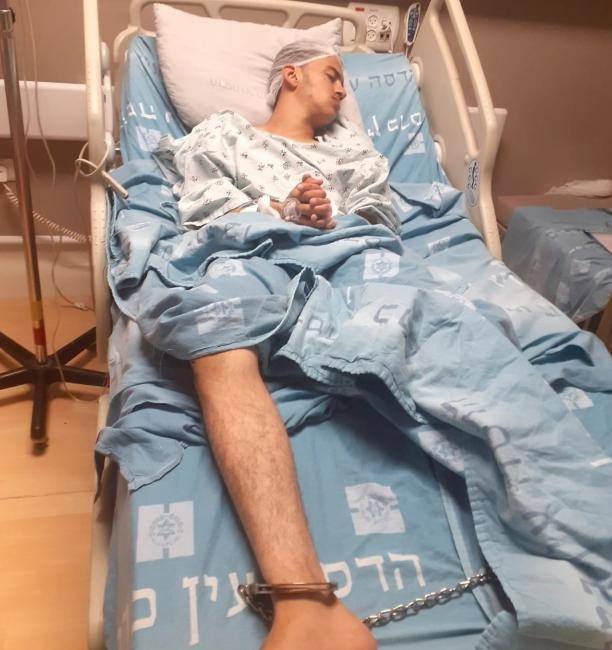 Mahmoud Moqbel, 16, cuffed in the leg while at his hospital bed after he was severely beaten by Israeli soldiers and suffered a broken jaw.

RAMALLAH, Tuesday, December 08, 2020 (WAFA) – A 16-year-old Palestinian minor told his lawyer that he was severely beaten when detained by Israeli occupation soldiers last week and that he suffered a broken jaw and teeth, as well as bruises and cuts all over his body.

Mamoun al-Hashem, an attorney with the Commission of Detainees and Ex-Detainees Affairs, said that Mohammad Moqbel, from Arroub refugee camp, north of the occupied southern West Bank city of Hebron, told him when he visited him yesterday at Hadassa Hospital in West Jerusalem, where he is getting treatment while in detention, that he was severely beaten by the Israeli soldiers when he was detained last Tuesday at the refugee camp.

He said Moqbel was in stable condition at the hospital and that he underwent surgery on his jaw two days ago that lasted for more than three hours.

Moqbel told his lawyer that he was in the camp when clashes broke out between youths and Israeli soldiers, who fired tear gas and stun grenades at the youths forcing him to run away with other kids. Three soldiers followed them and he took refuge in a home before one of the soldiers followed him into the house where he caught him and hit him powerfully with his rifle butt on his left jaw.

The soldier then pulled Moqbel out of the house and threw him on the ground. Other soldiers joined in beating him and kicking him while he was on the ground. As a result, he was left with several injuries and bruises while bleeding from the mouth for 10 minutes before he was thrown into an Israeli military vehicle. Three other minors were in the jeep, he said, and the soldiers kept putting their feet on them while cursing them.

The kids were then handcuffed and taken to Etzion detention facility in the south of the occupied West Bank where Moqbel was brought before interrogators who assaulted him verbally and accused him of throwing stones at the soldiers. After the interrogation, he was left in an open area in very cold weather conditions for six hours. At midnight he was put in a cell but due to the severe pain he was suffering and the screaming, he was taken to Hadassa Hospital the next morning where an x-ray showed that he had a broken jaw and teeth caused by the hard beating he received from the soldiers.