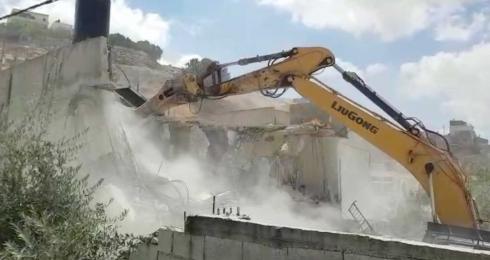 BETHLEHEM, Wednesday, October 21, 2020 (WAFA) – Israeli forces today demolished a Palestinian-owned house and seized construction equipment in the town of al-Khader, to the south of the occupied West Bank city of Bethlehem, according to the house owner who confirmed that this is the fourth time in two years Israeli forces demolish his house for alleged construction without a permit.

The house owner, Sameeh Salah, told WAFA that a large military force raided the area where his house is located and prevented people from entering or leaving the area before proceeding to demolish his 120-square-meter house and seize the building equipment.

He said this the fourth time his house has been demolished and every time he rebuilds it.

Israel prevents Palestinian development in that area and in all of Area C, which makes more than 60 percent of the area of the occupied West Bank, in favor of expanding or building illegal settlements.