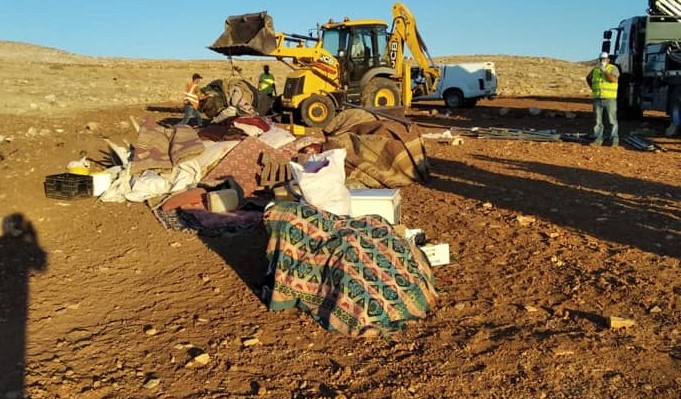 Eight residential structures were demolished in Wadi al-Seeq, near Ramallah.

They said a large Israeli military occupation force escorted a bulldozer into the community, established on rented land belonging to the adjacent towns of Deir Dibwan, Rammun and Taybeh, where the heavy machine tore down the structures, displacing their occupants, and seizing their contents.

Owners of the demolished structures were identified as three members of the Ka‘abneh clan.

As one of 46 Palestinian Bedouin communities at the risk of forcible transfer in the northeastern Ramallah district, Wadi al-Seeq is a home of some 150 people, 62 percent of whom are children, and their flock, as housed in approximately 100 makeshift structures.

They depend on the sale of their dairy products and wool in local markets for their livelihood. They are neither connected to water or electricity networks and rely on the costly delivery of water tanks (4x the cost of piped tariffs) and solar panels.

The community was expelled from their lands in the Naqab in 1948 to the Jordan Valley, becoming refugees, and eventually settled in Wadi al-Seeq, where they have resided in the West Bank prior to its occupation in 1967 or the designation of certain lands as “C” following the Oslo Accords, as confirmed by the Jerusalem Legal Aid and Human Rights Center (JLAC).

“Yet, the community, as all Bedouin communities in the West Bank, has been continuously targeted by the State of Israel for its presence in key areas earmarked for effective annexation (i.e. the Jordan Valley and the Jerusalem periphery).”

The community falls along the Alon settlement road (Road No. 458) connecting the colonial settlement blocs in the vicinity to each other; Kochav Hashachar, Rimonim and Ma’ale Michmash, on route to the Jordan Valley. Its vulnerability to forceful displacement is exacerbated by the footpaths frequented by Israeli hikers and violent settlers.

It first received blanket demolition orders issued by the Israeli Civil Administration, the name Israel gives to the body administering its military occupation of the West Bank, in 1996 on alleged grounds that the vicinity was a “closed military training zone”. The Israeli Supreme Court ruled at the time that the communities’ structures (save for the three structures furthest East) do not pose a “threat” to the State of Israel and may continue to be situated in their vicinities.

The community received a new batch of demolition orders in October and November of 2018, and another batch in May of 2019, including a demolition order against the community’s sole elementary school, built with European Union donor funding, a step that prompted the EU to deplore the continuing threat of demolitions and seizures of Palestinian structures.

The community received a third batch of demolition orders in May 2020, with 34 new orders against housing and livelihood structures.

While Israel denies planning permits for Palestinians to build on their own land or to extend existing houses to accommodate natural growth, particularly in Jerusalem and Area C, it much more easily gives the estimated 550,000 Jewish Israeli settlers building permits and provides them with roads, electricity, water and sewage systems that remain inaccessible to many neighboring Palestinians.