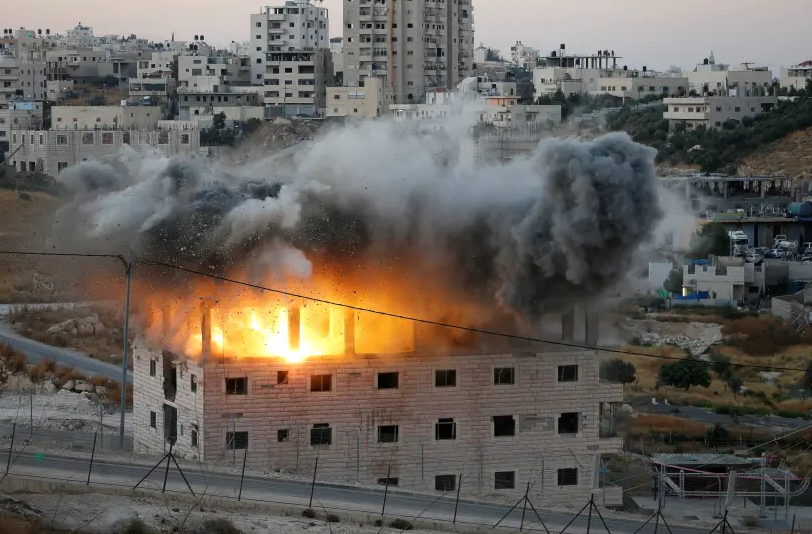 A Palestinian building is demolished by Israeli occupation forces in Wadi Hummus, located near the Israeli segregation barrier just outside of Jerusalem in the West Bank, July 22, 2019

BETHLEHEM, Saturday, August 22, 2020 (WAFA) – Israeli occupation forces handed today notices informing the owners of two buildings in Wadi al-Hummus area, northeast of the city of Bethlehem, south of the occupied West Bank, about their intention to demolish the two buildings, according to a local source.

Hasan Burajiya, director of the office of the Apartheid Wall and Settlement Resistance Commission in Bethlehem, told WAFA that the occupation forces ordered the demolition of the two buildings, each consisting of two floors of 200 square meters, under the pretext that they are too close to the Israeli segregation barrier.

Last year, the occupation authorities demolished over a hundred apartments in the area under the same pretext, leaving their Palestinian residents homeless.

The demolitions were condemned by the international community at that time, including the EU which said that the majority of the demolished structures, unlike others Israel has demolished in eastern Jerusalem, are located in Area A and B of the West Bank, “where, according to the Oslo Accords, all civil issues are under the jurisdiction of the Palestinian Authority.”