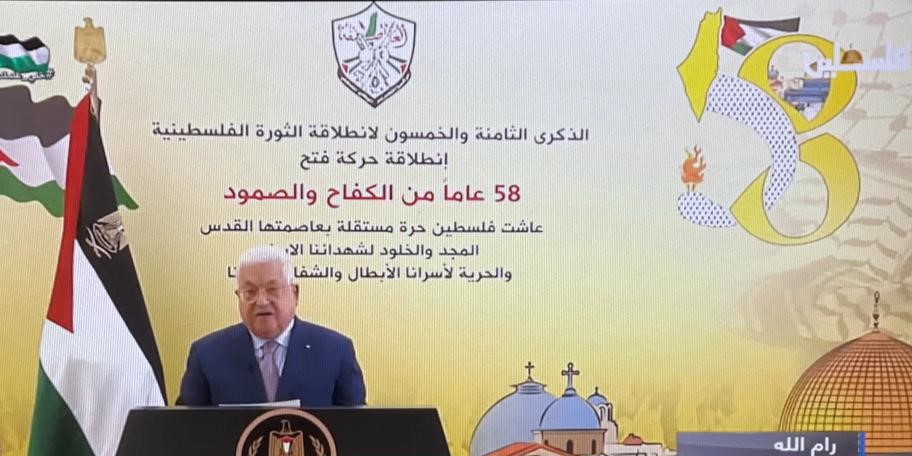 RAMALLAH, Saturday, December 31, 2022 (WAFA) –  President Mahmoud Abbas said tonight that the Palestinian people will remain committed to their land and their legitimate national rights until independence.

Speaking on the occasion of the 58th anniversary of the launch of the contemporary Palestinian revolution and the Fatah Movement, the President said, “We say to the occupiers, the greater your tyranny, the greater our people will be in facing your aggression and terrorism, and in adhering to their land and their legitimate national rights.”

He continued: “The Israeli government's extremist and racist plans will inevitably fail with our steadfastness on our land,” stressing that “just as we brought down the deal of the century, we will bring down the colonial occupation's plots, with our unity, our adherence to our national constants, and our peaceful popular resistance.”

The President warned that the continuation of the Israeli aggression against our people will not achieve security and peace for anyone, stressing that “peace and security have one way, which is for our people to obtain their rights, and to embody their free, independent and fully sovereign state on their land, with its eternal capital, East Jerusalem”.

He stressed that “we will remain committed to our historical and legal rights to our land, sanctities, and property, from which we were uprooted as a result of Israeli tyranny and terrorism.”

The President called on all the spectra of the Palestinian people to engage in a comprehensive Palestinian national political dialogue in the near future in order move forward to achieve the goals of our people.