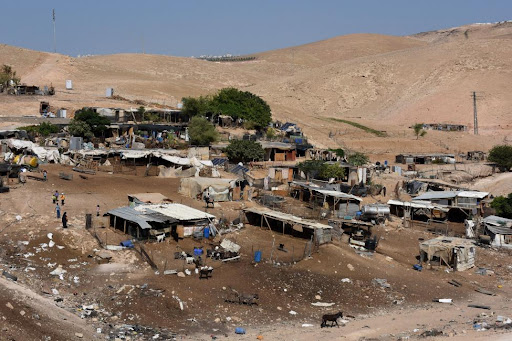 RAMALLAH, Wednesday, September 29, 2021 (WAFA) - The Israeli High Court today agreed to a government request and postponed the displacement and eviction of the Palestinian residents of Khan al-Ahmar village, east of Jerusalem, for another six months prompting Palestinians to attribute this decision to the steadfast position of the residents against their displacement and warnings by the International Criminal Court (ICC).

Walid Assaf, head of the Wall and Settlement Affairs Commission, told WAFA that the High Court's decision comes in light of the continued pressure of the international community and the ICC's warning that the eviction and displacement of the residents amount to a war crime.

"We are ready to confront any demolition or displacement attempt by the Israeli occupation authorities in the Bedouin community of Khan al-Ahmar,” he said, pointing out that the occupation government has a plan since 1967 to relocate the Bedouin communities, not only Khan al-Ahmar, but all the Palestinian residents of the Jordan Valley, the eastern slopes, and Area C, where construction and zoning are prohibited, in addition to not allowing these communities to connect to the water and electricity networks, or building schools.

"The occupation authorities tried to force the residents of Khan al-Ahmar to leave, but they failed because of the resident’s legendary steadfastness, and also because of the issuance of a decision by the International Criminal Court, which warned the Israeli government against displacing or demolishing the village and the surrounding communities in the area known as E1, considering such an act a war crime, in addition to the diplomatic effort and the strong international position in support of the Palestinians staying on their lands, as well as the determination of the residents themselves against accepting any comprise solution short of staying and recognizing their village,” said Assaf.

The High Court ruled on September 5, 2018, to evacuate and demolish Khan al-Ahmar, the largest Bedouin community in the area, after it rejected a petition by the residents against their eviction, displacement and demolition of their community.

However, it postponed the implementation of its decision under local and international pressure.

Around 200 people live in the community from the Jahalin tribe since the 1950s.

The village of Khan al-Ahmar is surrounded by a number of illegal Israeli colonies and is located within the lands targeted by the Israeli occupation to implement its "E1" settlement project, which, if implemented, would isolate occupied Jerusalem from its surroundings and divide the West Bank into two parts.