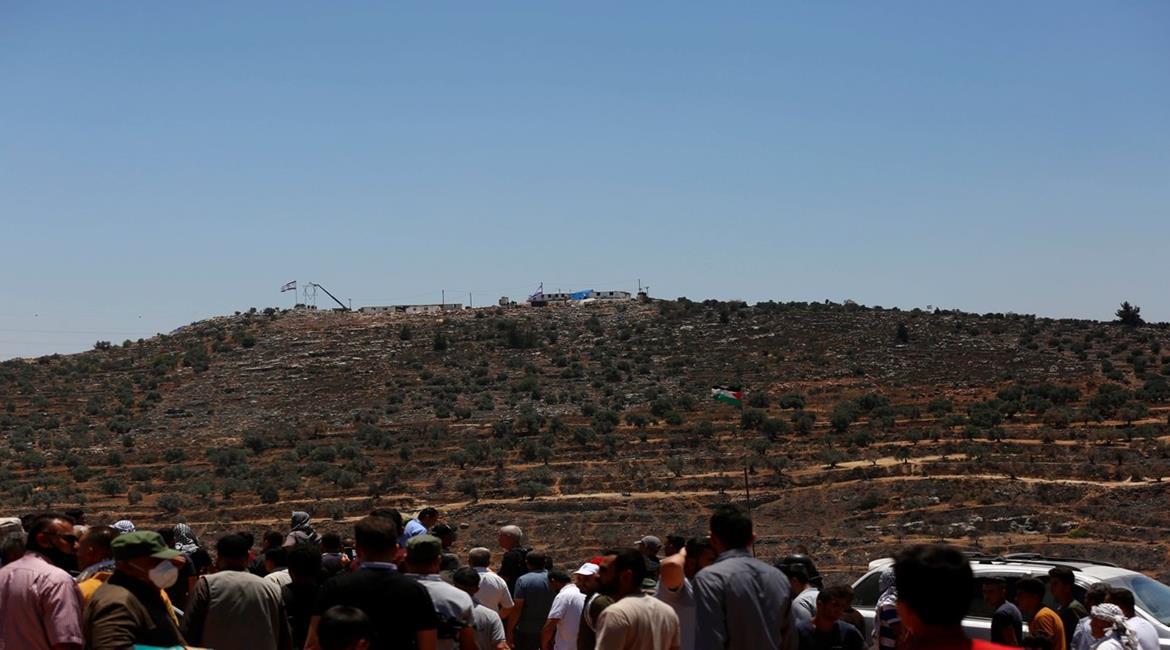 RAMALLAH, Thursday, July 08, 2021 (WAFA) - The local councils of Beita, Yutma and Qabalan, in addition to nine Palestinian property owners from Qabalan, today filed a petition before the Israeli High Court demanding the cancellation of an agreement signed last week between the Israeli government and Israeli settlers that paves the way for the retroactive legalization of the Evyatar outpost that had been violently and illegally built on private and agricultural Palestinian lands on the Jabal Sabih.

It was submitted against the Israeli occupation government and its defense minister, the Military Commander in the occupied West Bank, the Israeli Civil Administration (ICA), and the Shomron Regional Council for adopting and signing a blatantly unlawful agreement designed to entrench the outpost and to whitewash the criminal offences of invasion, trespassing and illegal construction it constitutes, according to a statement by JLAC.

The outpost was built on an area covering 35 dunums, seizing private Palestinian land and preventing the access of some 30,000 residents of the three villages to the land, including agricultural land they had plowed and cultivated.

According to the so-called compromise reached between the Israeli government and the trespassers, the Evyatar settlers “agreed” to peacefully but temporarily evacuate the outpost, while its illegal buildings and structures remain intact, until the Israeli government and the ICA “examine” the legal status of the land. In the meantime, the Israeli occupation army issued a military seizure order over the 35 dunums of Palestinian land on which the outpost extends, acting as a custodian on the settlers’ behalf.

The Samaria Regional Council, which actively aided in the construction of the Evyatar outpost and many illegal outposts across the West Bank, is tasked with “maintaining” the illegal buildings and overseeing the implementation of the agreement.

For the petitioners, the outcome of such a compromise and the “examination of the legal status of the land” is a forgone conclusion: declaring it as state land, confiscating it from its rightful Palestinian owners, and awarding invasion and trespass. In fact, as cited by Justice Esther Hayut in her majority opinion in the Regularization Law petition, the ICA confirmed that any state land in the West Bank allocated for use is almost exclusively allocated for settlers (99.8%).

The petition emphasized that the compromise cynically and explicitly flouts the principle of respecting and ensuring public order and safety while respecting the laws in force in the country, as codified by Article 43 of the Hague Regulations. Further, Article 46 of the 1907 Hague Regulations prohibits the confiscation of private property and Article 53 of the Fourth Geneva Convention prohibits the destruction of public or private property, individually or collectively owned by the protected population, in the absence of military necessity.

Doubtless that confiscating private Palestinian land and awarding it to violent invaders can by no means constitute a military necessity as such. What is more: the entirety of the settlement enterprise is illegal under Article 49 of the Fourth Geneva Convention and may amount to a war crime under the Rome Statute and was included among the crimes to be investigated by the Office of the Prosecutor of the International Criminal Court.

Beyond the systematic violations of international humanitarian law and international human rights law, the petition stressed that the compromise to retroactively legalize the Evyatar outpost flagrantly contravenes Israeli administrative law, including the principle of respecting the rule of law.

On 6 June 2021, the Israeli army issued an eviction order against the Evyatar outpost and an order to demolish its structures based on military order 1797 for the removal of new structures. The deputy attorney-general in the West Bank rejected the settlers’ objections against the eviction and removal orders on 20 June, stating that the settlers “had blatantly and severely violated the law” and continued to build illegally even after the issuance of the military order (para 21 of the petition.)

With the signing of the Evyatar arrangement, the Israeli Military Commander abdicated from its responsibility to honor its own orders (para 25). “The spirit of the agreement,” the petition adds, entails illegal obligations on the Israeli government and its very signing reveals that the state has abandoned any semblance or appearance of justice, legality, and respect for the rule of law (para 28).

If the High Court does not strike down this agreement, it will signal to the invaders and trespassers that aggressive violations of the law are profitable. It will set the tone for reproducing the Evyatar model across the West Bank, where settlers with absolutely no claim can invade Palestinian land with impunity and violence, certain that their lobbying and political pressure will yield similar compromises (para 30).

The area on the Sabih hill where the Evyatar outpost was constructed received a military seizure order in the early 1980s, blocking Palestinians from accessing 11 dunums of their property; an additional seizure order issued by the Israeli army in 2018 extended the seized land to 24 dunums. The outpost stretches even beyond the areas seized by the two military orders, targeting lands that until the establishment of the outpost had been controlled and plowed by Palestinians.

Presenting documents, inheritance deeds, and photographs, the petitioners offered ample evidence that the land on which the Evyatar outpost was built is private Palestinian land and that many dunums had been cultivated by Palestinian farmers, as testified by decades-old olive trees. But even if one were to suppose, for the sake of mere theoretical discussion, that the designation of the land could be subject to examination, the pledge of the state to “return” the settlers to the Sabih hill should the land be classified as state land has absolutely no legal justification.

The petition against the Evyatar agreement was filed on the backdrop of ongoing Palestinian popular resistance against the outpost, the Israeli occupation authorities’ attempts to legalize it, and the collusion between Israeli settlers and the military. Since mid-May, five Palestinians have been killed by the Israeli occupation army while defending their land against settler invasion, four of whom are from the village of Beita and one from Yutma. Two of the martyrs are teenage schoolboys.

The consolidation of the Evyatar outpost through bypass agreements will further perpetuate this cycle of deadly repression against the occupied population, said the statement.

In its decision to strike down the regularization law, justice Esther Haut argued that the law was too sweeping and arbitrary, a mechanism for the retroactive legalization of thousands of outposts built on private Palestinian land. Even by the token of the alternatives she suggested to the law, however, this arrangement stands no chance of validity. She maintained the importance of good faith in examining every case independently, and the Evyatar outpost’s construction and the arrangement reached to consolidate it are the polar opposite of good faith, it concluded.