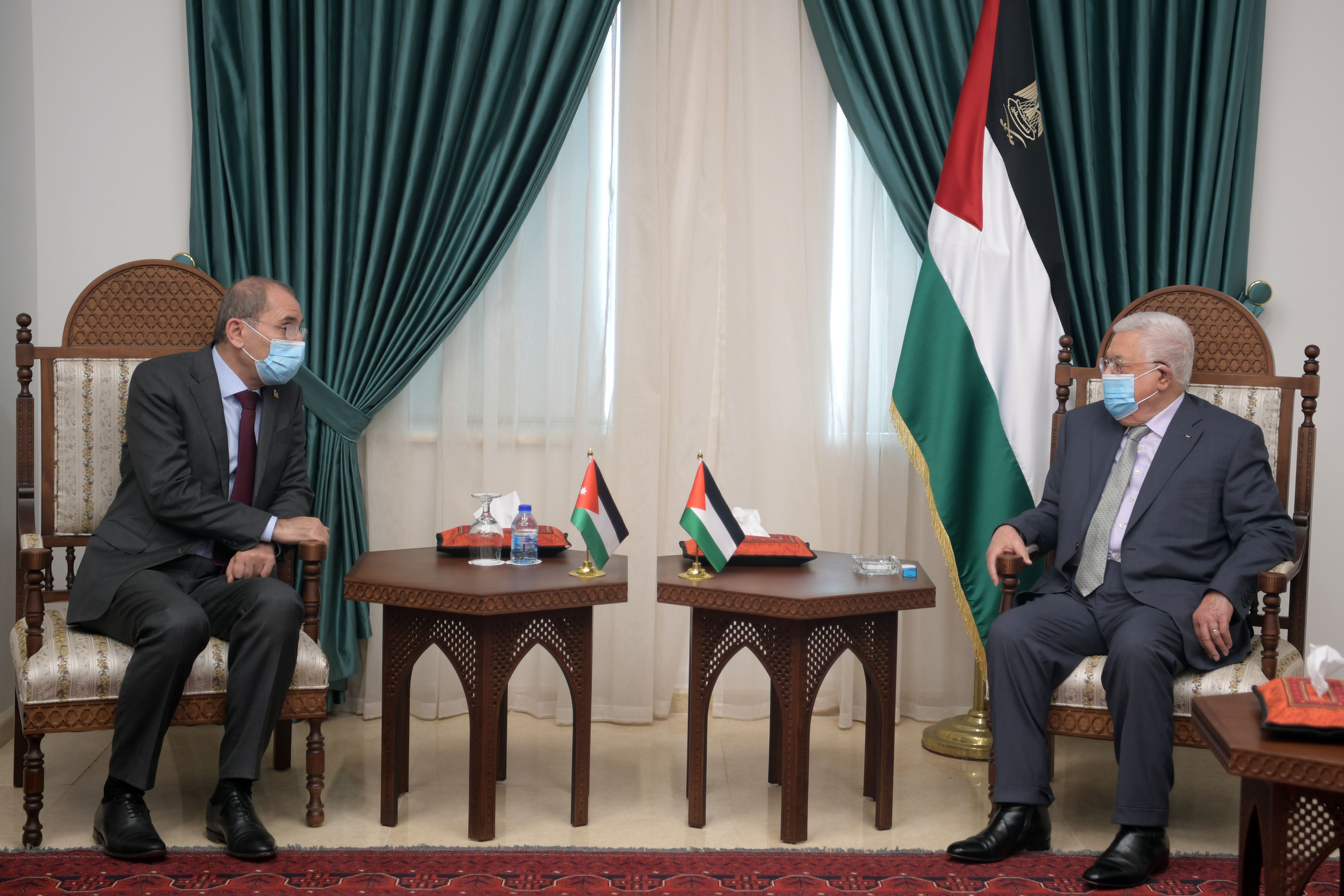 President Abbas received Safadi, who arrived aboard a Jordanian helicopter at the presidential headquarters in Ramallah, and conveyed a message of solidarity from Jordan’s King Abdullah II to the Palestinian people.

He briefed Safadi along with the accompanying delegation on the latest political developments on the Palestinian arena and the ongoing diplomatic contacts that the Palestinian leadership has initiated with the US, the UN in addition to Arab and international relevant parties to collaborate on halting the ongoing Israeli aggression against the Palestinian people in the occupied territories, particularly Jerusalem.

He stressed the need to intensify efforts to rebuild what the Israeli occupation has destroyed in the besieged Gaza Strip and that ensure the ceasefire include an immediate end to the Israeli assaults in Jerusalem and across the West Bank, including police and settler intrusions upon  Al-Aqsa Mosque compound, and respect for the historic status quo at the holy places, including Jordan’s custodianship over the holy sites in Jerusalem.

The consolidation of the ceasefire, Abbas pointed, should be followed by the pursuit of a political track, under the International Quartet’s supervision, to end the Israeli occupation and enable the Palestinian people to gain their freedom and independence and establish their independent state, with East Jerusalem as its capital, based on the UN resolutions and international law.

Highlighting the intra-Palestinian dialogue, President Abbas reaffirmed the leadership’s willingness to proceed with the dialogue to form a national unity government that adheres to the UN resolutions.

Jordan’s Foreign Minister, Safadi, stated that he came to deliver a message from Jordan’s King, Abdullah II, expressing Jordan’s support and constant readiness to coordinate efforts to halt the Israeli aggression on the Palestinian people in Jerusalem and the holy sites, reinforce the their steadfastness in Jerusalem, including Sheikh Jarrah, and halt settler assaults.

He underscored the significance of a ceasefire in the West Bank and Gaza, rebuild Gaza and hasten the pursuit of a political solution which ends the Israeli occupation and establish the independent Palestinian state, with East Jerusalem as its capital, in line with the UN resolutions and international law.

Safadi’s visit came a day after President Abbas met Egyptian Foreign Minister Sameh Shoukry in Ramallah and days after the Egyptian-brokered ceasefire came into effect between the Palestinian factions and Israel, putting an end to Israel’s 11-day onslaught, which killed some 254 Palestinians, including 66 children and 39 women, wounded around 1948 others and brought widespread devastation to the already impoverished strip.

Recent tensions and confrontations started in Jerusalem over the Israeli occupation authorities’ decision to ban people from sitting on the stairs outside Bab al-Amoud and encroachments upon al-Aqsa Mosque compound during the Muslim fasting month of Ramadan, and further escalated over the forced expulsions of families from Sheikh Jarrah.

Tensions spread other parts of the West Bank, Gaza and Palestinian towns and cities inside Israel, culminating in a general strike and mass protests against Israel’s brutal settler-colonialism and apartheid regime.