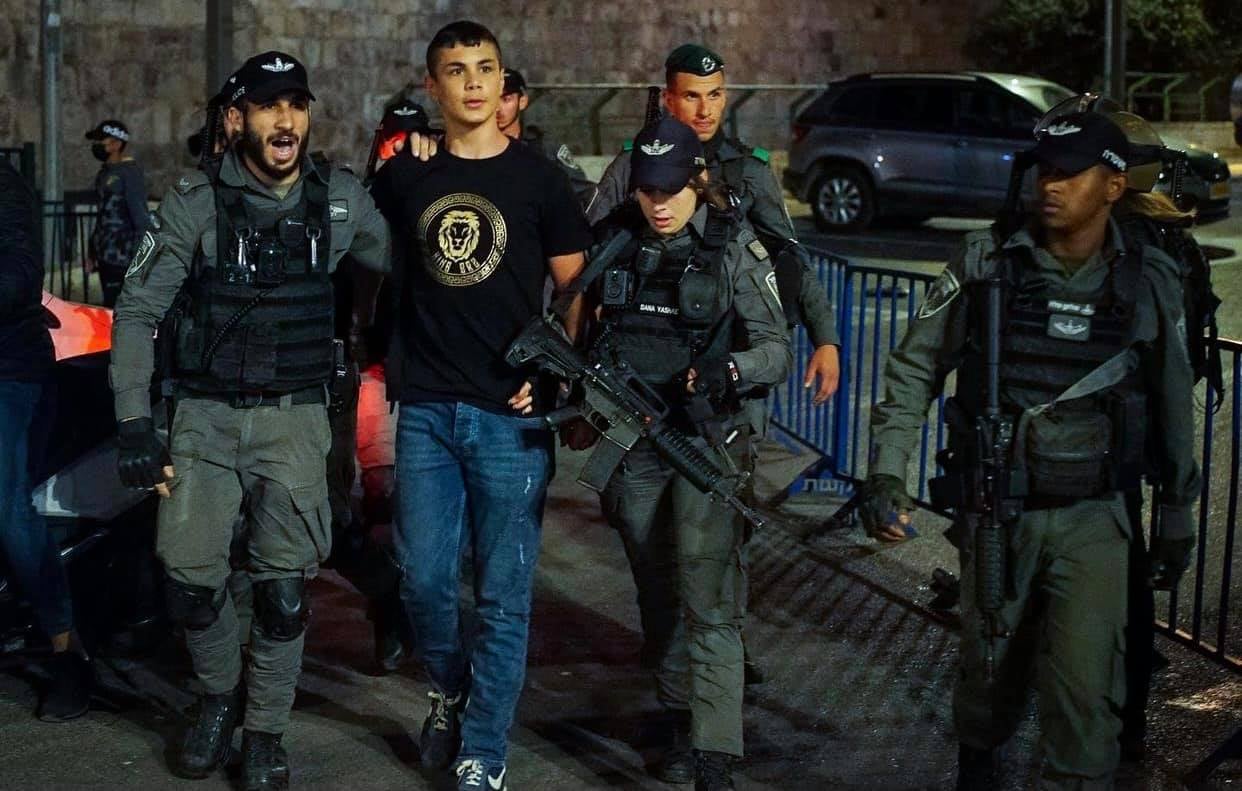 Israeli occupation police officers round up a Palestinian teenager during the night clashes outside Damascus Gate, occupied Jerusalem, April 22, 2021.

JERUSALEM, Friday, April 23, 2021 (WAFA) – Over 100 Palestinians were injured and 50 others were detained in nightly violent clashes with Israeli police and settlers amid simmering tensions surrounding the holy month of Ramadan in the occupied city of East Jerusalem.

Violent clashes broke out between extremist Israeli settlers and Palestinians after some 300 extremist Jewish settlers marched towards Damascus Gate outside the Old City of Jerusalem, shouting “Death to the Arabs” and “Arabs get out” late on Thursday.

The settler march was organized and led by Lehava, a Jewish supremacist anti-miscegenation group whose members physically assault Palestinians suspected of dating Jewish women and whose leader, Bentzi Gopstein, also expressed support for burning down churches.

Policemen fired stun grenades, tear gas and water cannons against Palestinians who attempted to confront the settler march, and some of whom threw stones and bottles, injuring over 100 and detaining some 50 others.

The Palestinian Red Crescent sources said that at least 105 Palestinians were injured, including 22 who sustained moderate injuries and required hospital treatment. The others were treated at the scene.

The clashes spread to other parts of the occupied city of Jerusalem, including the Sheikh Jarrah, Musrara, the French Hill colonial settlement, al-Tur and Wadi al-Joz, and lasted until the early morning hours of Friday.

Meanwhile, dozens of Israeli settlers took to Highway 1, the main highway which separates West and East Jerusalem, intercepting vehicles to identify Jerusalemite Palestinians and assault them, as Israeli police did nothing to stop them.

In the Sheikh Jarrah neighborhood, a group of settlers attacked a Palestinian woman driving her vehicle with stones, injuring her in the head.

They also vandalized dozens of other vehicles belonging to the neighborhood residents and others displayed at a local motor show at al-Mutran Street, hurling stones at them and slashing their tires.

Similar violent clashes erupted in al-Tur neighborhood, where a number of its residents sustained injuries and others set a settler bus which entered the neighborhood on fire.

The past ten days have seen night-time clashes between police and worshippers in the East Jerusalem, with tensions mounting over the police decision to ban people from sitting on the stairs outside Bab al-Amoud, also known as Damascus Gate, under the guise of implementing the coronavirus restrictions, and its decision to disconnect the power supply to the call to prayer at the mosque compound.