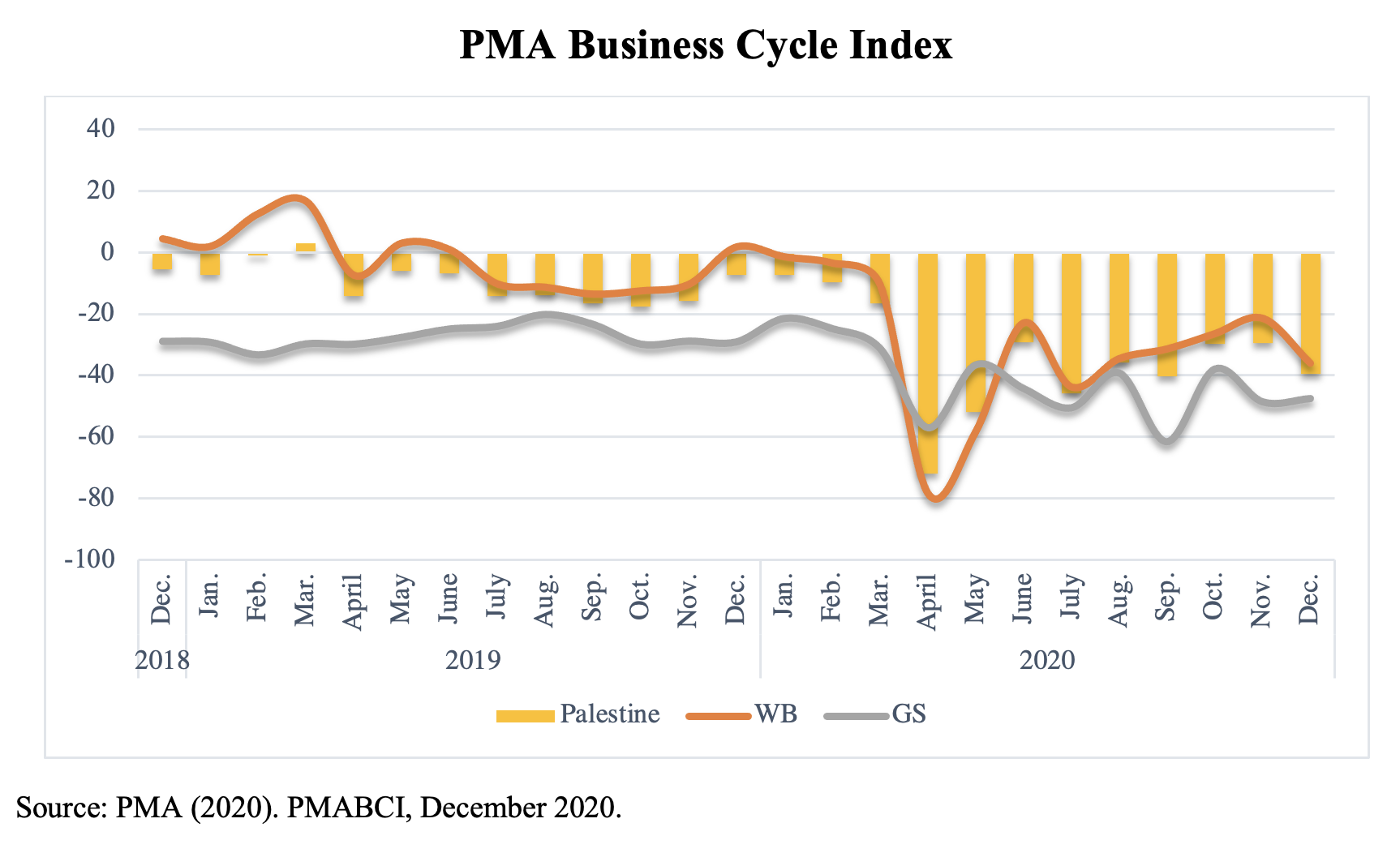 RAMALLAH, Thursday, January 14, 2021 (WAFA) - The results of the Palestinian Monetary Authority /PMA/ Business Cycle Index /PMABCI/ for December revealed that the overall index has resumed declining against the backdrop of the shrunk in the West Bank’s index, and despite the relative stability in Gaza Strip’s index, today said a PMA press release.

In the West Bank, the index has failed to maintain its previous gradual improvement, slipping from -21.4 points to about -36 points this month, said the PMA. This was resulted as all sectoral indices fell, except for the minor increase in the agriculture index from -2.7 to -1.8 points.

In general, the surveyed firm owners in the West Bank indicated a remarkable drop in production and sales levels during December.

Moreover, they expressed high pessimism about the near future, expecting lower production and employment in the three coming months.

Meanwhile, the sectoral indices in the Gaza Strip experienced a narrow up and down movement, resulting in a minor increase in the Gazan index, scoring around -47.5 points compared to -48.6 points in the previous month. The rises have been seen in the indices of trade from -39.7 to -38.6 points, construction from -2.0 to -1.0 points, and agriculture from 1.0 to 2.0 points. Meanwhile, the declines were in the indices of manufacturing from -6.0 to -7.5 points, transport and storage from -1.4 to around -1.9 points, and IT and communication from -0.3 to -0.4 points. At the same time, the renewable energy index maintained its previous level at around -0.1 points.

Owners of surveyed firms in Gaza indicated a relative decline in the levels of production and sales during this month. Nonetheless, they expressed optimism about the near future, expecting some improvement, particularly in production levels.

It is noteworthy that the extended PMABCI is a monthly index, which aims at capturing the state and evolution of economic activity in Palestine by tracking sectoral performance (especially fluctuations in production, sales and employment levels). The overall index is simply the sum of all sectoral indices. Its maximum is positive 100 points, while the minimum is minus 100 points; a positive value indicates favorable economic performance, while a negative value indicates bad performance. On the other hand, a value close to zero indicates that economic performance did not change and is unlikely to do so in the near future.