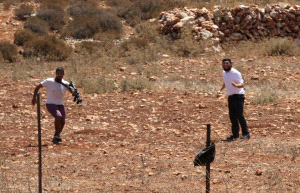 Head of Al Malih Village Council, Mahdi Daraghmeh, said that the settlers brutally beat a shepherd while the latter was grazing his sheep at the community.

He added that the settlers have embarked on the construction of structures close to the community, raising concerns of rendering off-limit additional large tracts of pastures.

Settlers have already seized the water spring of Ein al-Hilweh, preventing people from watering their crops from the spring, which they have been doing to decades.