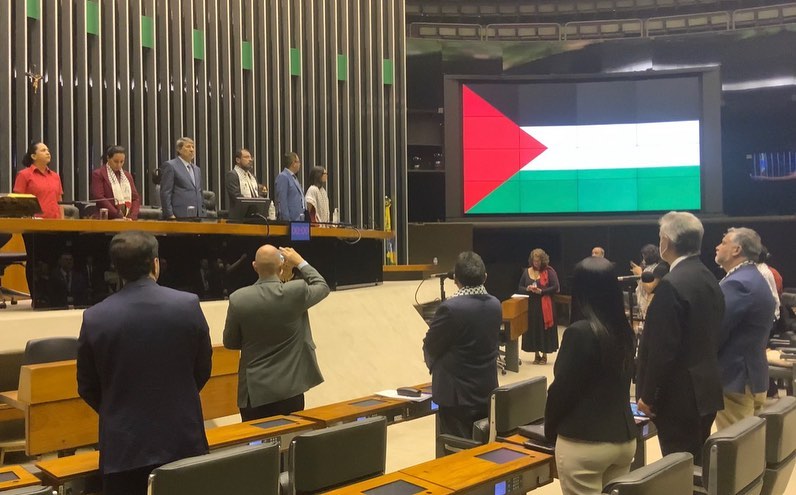 BRAZILIA, Saturday, July 9, 2022 (WAFA) – The Brazilian Parliament Congress Friday held a special session for Palestine to express their solidarity with the Palestinian people against the continuous aggression of the Israeli occupation.

The session came following an invitation by a number of deputies who support the Palestinian question, such as Camilo Capiberibe, Alexandre Padilha and Márcio Jerry, in partnership with the Brazil-Palestine Institution (IBRASPAL). The session was also attended by a number of diplomats from Arab, Islamic and Latin American countries including Cuba, Nicaragua, Zimbabwe, Nigeria, Iran, Libya, Dominican Republic, Qatar and Belarus.

The session opened with the Palestinian national anthem, followed by a speech by the Congress President, Arthur Lira. "Brazil has always sought to cooperate with the international community for a peaceful and negotiated solution to the Palestinian-Israeli conflict," Lira told attendees. He stressed that Brazil's international relations are governed by "the prevalence of human rights, self-determination of peoples, non-intervention, the defence of peace, the peaceful solution of conflicts and cooperation". Lira also recalled that Brazilian diplomacy has always worked for a peaceful solution to the Palestine issue.

According to Deputy Paulo Pimenta, the Workers' Party and its deputies "are historically committed to the Palestinian cause. When our party had the opportunity to rule the country, it expressed its full role in recognizing the rights of the Palestinian people to obtain their lands."

Pimenta confirmed also that this session reinforces the importance of international solidarity in the fight against apartheid and Israel's crimes against humanity in Palestine. "The struggle of the Palestinian people is the struggle of everyone who believes in their right to own their land," he insisted. "Keeping silent on the continuation of Israeli crimes is akin to participation in them, and no one can remain silent about the genocide against the Palestinian people."

Since the rise of the Brazil's Workers' Party in 2002 under the rule of the former President Luiz Inácio Lula da Silva's, Brazil has taken a balanced attitude towards the conflict in occupied Palestine. In 2010, Lula recognised Palestine as an independent state within the 1967 borders with the majority of South American states following suit within the first three months of 2011. He took many measures in favour of Palestine, including raising diplomatic representation between the two countries and allocating a plot of land near the Brazilian presidential palace for the Palestinian Embassy.

The session was also attended by the Palestinian Ambassador to Brazil, Ibrahim Alzeben, and the President of IBRASPAL, Ahmed Shehada. "The brutal Zionist entity attacks the Palestinian people through the ethnic cleansing, murder, displacement and confiscation of land, property, religious and cultural monuments of Palestinian people. It is trying to impose a fait accompli that contradicts history, reality, international law and United Nations resolutions," Shehada said at the session.

He asked Congress to "continue the efforts and play an active political and diplomatic role to prevent the occupation from continuing the crimes against Palestinians. We hope that this Parliament will adopt a set of measures and steps that will contribute to the suppression of the occupation and its sense that it is above the law and accountability."