President Abbas at the Central Council: We will not accept the continuation of the occupation 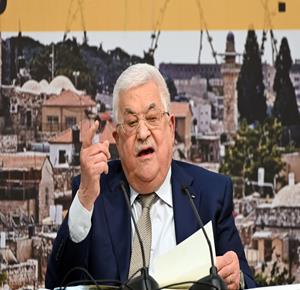 RAMALLAH, Sunday, February 06, 2022 (WAFA) – Speaking at the opening session of the 31st session of the Palestinian Central Council convening tonight in Ramallah, President Mahmoud Abbas stressed that the continuation of the Israeli occupation will not be accepted.

"We will not accept the continuation of the occupation and its colonial practices that perpetuate apartheid and settler terrorism," said President Abbas.

"In the face of the Israeli occupation authority's undermining of the two-state solution, options remain open, and the entire existing situation must be reviewed in order to preserve the interests of our people and our cause," he said, adding, "It is not possible to continue implementing agreements unilaterally, and our contacts with the Israeli side are not a substitute for a political solution based on international legitimacy."

President Abbas said he rejected the former US administration's "deal of the century", stressing that East Jerusalem will remain the eternal capital of the State of Palestine.

"We will continue to support the steadfastness of its people," adding, "We call for expanding the scope of peaceful popular resistance in defense of our identity and existence," while praising "the uprising of Jerusalem and Sheikh Jarrah and the heroism of our people in villages, cities and camps."

He said that he continues to work with the US administration of President Biden to strengthen bilateral relations, and "we are still waiting for the implementation of its commitments to protect the two-state solution and the signed agreements."

He stressed that the international community must bear its responsibilities to implement the resolutions of the United Nations in the face of Israeli arrogance.

"We stress the necessity of convening the International Quartet at the Ministerial level. The Oslo Accord was temporary, and through it we did not make any concessions that affect our principles. It brought the Palestine Liberation Organization (PLO) back to our homeland and established the institutions of our State on our land."

President Abbas stressed that the institutions of the PLO must be preserved and activated as the sole and legitimate representative of the Palestinian people, while affirming the independence of the national decision and adherence to the national principles as stated in the Palestinian National Council, the highest decision-making body, in 1988.

"We must preserve our national achievements, continue building our democratic state institutions, adhere to the rule of law and freedom of expression, apply standards of transparency and accountability, combat corruption, enhance partnership with civil and private society, support creativity, empower women and youth, and strengthen the judicial system," he said.

"Amnesty International's report is an important step towards the reality of the Israeli crimes against our people, and the international community is required to implement it, and it serves as a warning to Israel of the need to end its racist occupation of our land and people," said President Abbas in reference to Amnesty's recent report that described Israel as an apartheid state for the way it treats the Palestinians.

He also stressed that the file of the Zionist gangs' massacres of Palestinians since 1948 until now will not be closed, and these crimes do not have a statute of limitations.

"We affirm our support for the steadfastness of our people in the camps and diaspora, and the defense of the right of refugees to return and compensation in accordance with international legitimacy resolutions," he said.

"It is necessary to provide international support for the continuation of UNRWA's work to enable it to perform its duties towards the Palestinian refugees in all their locations."

Talking about internal matters, President Abbas said, "We pay great attention to the reform process, which is an ongoing process, and we are ready to take whatever is necessary to make it successful."

However, he added, facing challenges requires an immediate end to the internal division.

"We seek to hold presidential and legislative elections as soon as we are able to hold them in Jerusalem, and we have completed the first phase of organizing municipal elections, and work is underway to complete the second phase as scheduled."

The President said that there is Arab consensus on the centrality of the Palestinian cause. "Our Arab relations are impeccable, and we are keen not to interfere in the internal affairs of others, and we do not allow interference in our internal affairs."

He saluted the Palestinian martyrs, prisoners, wounded, and their families.

"We salute our people in the diaspora that are struggling to explain our story and show the rights of our people, and we pay tribute to countries, international organizations and others, and everyone who stands by the freedom and justice of our cause in the whole world," the President said in his speech.