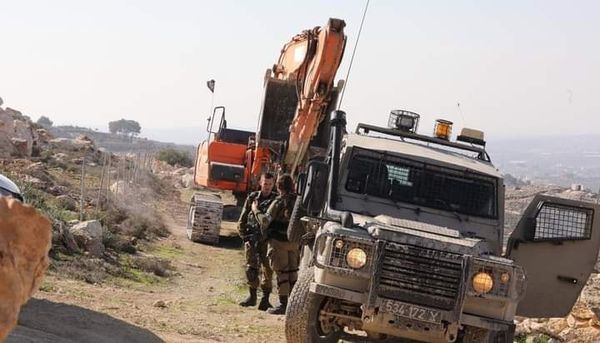 Israeli forces seizing a Palestinian-owned excavator in the Hebron area.

HEBRON, Thursday, January 06, 2022 (WAFA) – Israeli occupation forces today seized a Palestinian-owned excavator while it was working on land reclamation to the south of the occupied West Bank city of Hebron, according to a local resident.

Nabil Sharha, a landowner, told WAFA that the Israeli forces seized the excavator he was using to reclaim his land to the south of the village of Dura, near a quarry that they previously had seized.

He noted that his land, which is about 70 dunums in area, is located in Area C, which is under full Israeli military rule, adding that the Israeli authorities have been trying to seize more Palestinian-owned lands to expand the quarry they have seized.