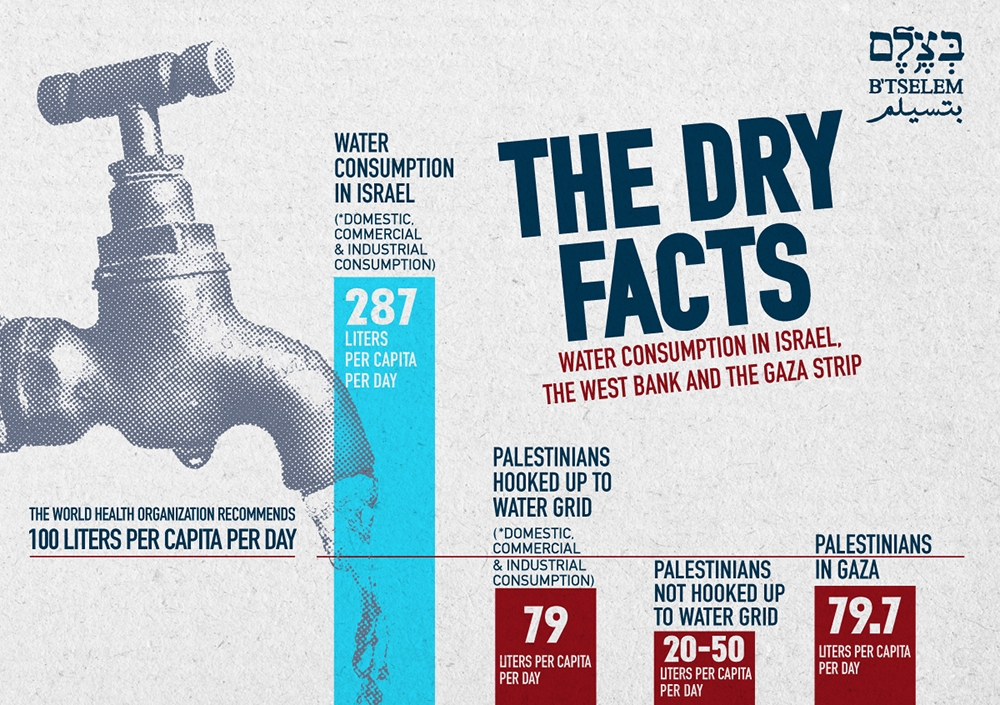 “In Palestine, a region rich in groundwater, Israel’s discriminatory water policies have led to water shortages in Palestinian towns and villages, no access to running water in rural communities, and waterborne diseases as a major cause of death in Gaza,” said Al-Haq in a statement. “Israel illegally appropriates Palestinian land, pillaging Palestinian water and then discriminately allocates water supplies to its citizens and to illegal Israeli settlements at the expense of Palestinians, who own and are entitled to access these water resources. As a result, Israel’s ‘water-apartheid’ facilitates gross and systematic denial of Palestinians’ rights to adequate water, institutionalizing a regime of racial domination and oppression over the Palestinian people.”

“Israel ensures its control and disproportionate usage of water resource by preventing Palestinians from accessing their groundwater resources through the issuance of demolition orders for water structures, even on private Palestinian land. Often, the demolition of water structures is conducted by bulldozers from international companies, such as Volvo, Caterpillar Inc, Daio, JCB, LiuGong, Hyundai, and Hidromek,” said the rights organization.

“Corporations increasingly enable this appropriation by sustaining the ongoing dispossession of the already restricted water access to Palestinian communities. Israel’s parastatal institutions, such as Mekorot, have actively taken part in the pillaging of water from the Occupied Palestinian Territory (OPT), to then sell the stolen water back to Palestinians at ever-increasing prices, rendering Palestinians dependent on Israel to meet their water needs. Mekorot's monopoly over the water network enables the company to operate a system of segregation over the Palestinian population while providing a pipeline of running water to the illegal Israeli settlements in the OPT and inside the Green Line. The company holds complete discretion over the water supply to Palestinians through Mekorot-controlled water meters. Simply put, Palestinians are forced to buy over half of the water they consume.”

Al-Haq said corporations have an obligation to respect the rights of individuals and communities to water and other natural resources. In conflict affected areas, this requires companies to practice enhanced due diligence in understanding their impact on and ensuring compliance with human rights. A company that benefits from the opportunities or environment created by human rights violations, even indirectly, may be found complicit in those violations. Specifically, companies operating in situations of occupation, risk being held liable for violations of international law and must ensure that their engagements with state authorities do not encourage or facilitate the state’s unlawful practices.

The ‘home states’ (third-party states) of these transnational corporations must also respect human rights regarding their operations abroad. Especially in the context of annexation and war crimes, third-party states must exercise adequate oversight of business operations to prevent adverse human rights impacts caused by their operations abroad, as well as refraining from aiding or assisting in maintaining such a situation. Israel’s violation of international law entails the responsibility of third-party States to refrain from supporting Israel’s illegal practices, policies and measures in the OPT, including that of its illegal settlement enterprise and the appropriation of Palestinian natural resources, it added.

“By denying Palestinian sovereignty over their natural resources, Israel continues to deny the Palestinian people their inalienable right to self-determination. Israel’s control over all aspects of water in the OPT renders the Palestinian economy captive and entrenches an apartheid regime of discriminatory and segregating laws and policies. This allows Israeli domestic corporate actors to profit from the water shortage that is disproportionately borne by the Palestinian population. In a world that wants to uphold equality and the right to live with dignity, there is no place for water-apartheid,” said Al-Haq.

It called upon the international community, third-party states, and private entities to recognize Israel’s regime of racial domination and oppression over the Palestinian people, amounting to the crime of apartheid, and its implementation of “water-apartheid” that systematically denies Palestinians their right to water.

It also called on corporations, with dealings in the OPT, to cease all business relations with actors operating in Israeli illegal settlements, as this exposes companies to liability risks and shows complicity in serious violations of international law, including their complicity in maintaining Israel’s apartheid regime, and on third-party states to end support for Israel’s illegal practices, policies and measures in the OPT, including enterprises of illegal settlements and the appropriation of Palestinian natural resources, and to comply with their due diligence obligations through the immediate cessation of current and future demolitions of water structures in the OPT.

Al-Haq also called on the United Nations and the international community to annually and comprehensively update the UN database, assuring transparency of business enterprises that are involved in and profit from Israel’s “water apartheid.”