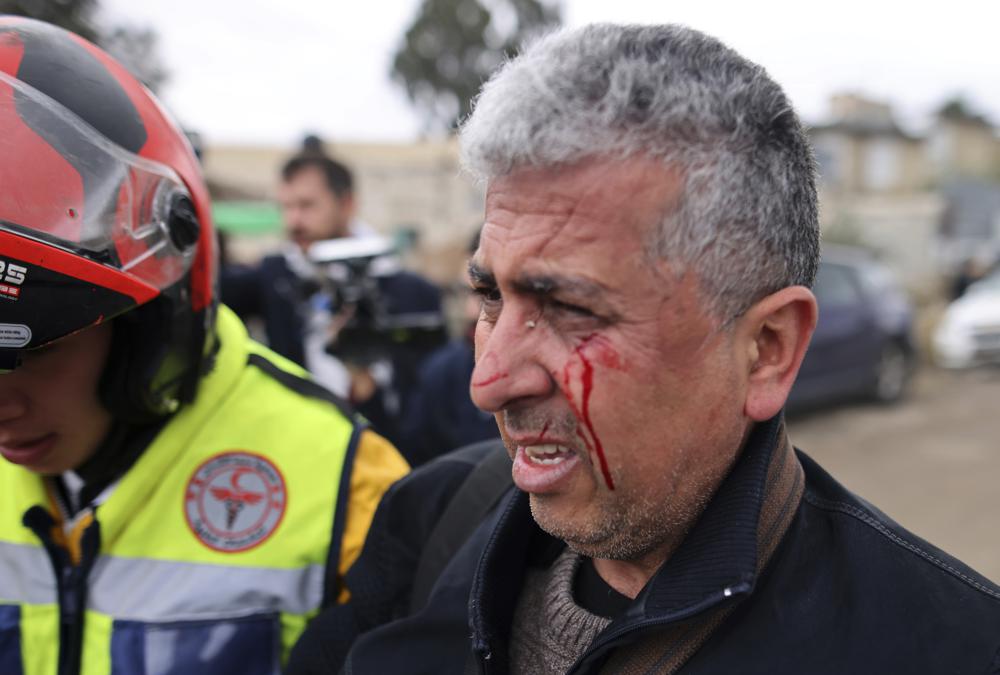 AP photographer Mahmoud Illean seen after being attacked by Israeli police while covering a protest against the expulsion of Palestinian families from their homes in the East Jerusalem neighborhood Sheikh Jarrah. (Credit: AP)

JERUSALEM, Sunday, December 19, 2021 (WAFA) – The Associated Press has said in a statement it was outraged by the violence against AP photographer Mahmoud Illean, who was pushed and beaten by Israeli police in an unprovoked attack on Friday.

Illean was covering a protest in the occupied Jerusalem neighborhood of Sheikh Jarrah against the possible expulsion of its Palestinian residents by the Israeli authorities when he was pushed and beaten up by police officers. He was shortly later hospitalized with head injuries.

According to Illean, Friday’s demonstration was relatively quiet, with only minor scuffles between Israel’s paramilitary Border Guards Police and Palestinian protesters.

He said that about 15 minutes after the demonstration kick-started, he was approached by a group of Border Guards Police officers who threw stun grenades toward him.

Video from the scene shows Illean standing in front of a white car when one of the officers approaches him, pushes him backward onto the ground and then proceeds to punch him several times.

A second video showed Illean photographing police attacking several other journalists before the officer turned on him. Illean’s face was bleeding and he was taken to Jerusalem’s Hadassah Hospital for X-rays.

“We are outraged by this senseless and unprovoked attack by Israeli police on an AP photographer, who was simply doing his job,” said AP spokeswoman Lauren Easton. “Such violence against journalists is abhorrent and unacceptable.”

The Foreign Press Association, which represents some 400 journalists working for international media in Israel and the Palestinian territories, said Friday’s incident was the latest in a string of attacks on journalists by the border police.

“The Foreign Press Association strongly condemns this behavior, which raises serious questions about the discipline and professionalism of the officers,” the group said, calling for a “serious investigation” and “appropriate disciplinary action against the officer involved.”