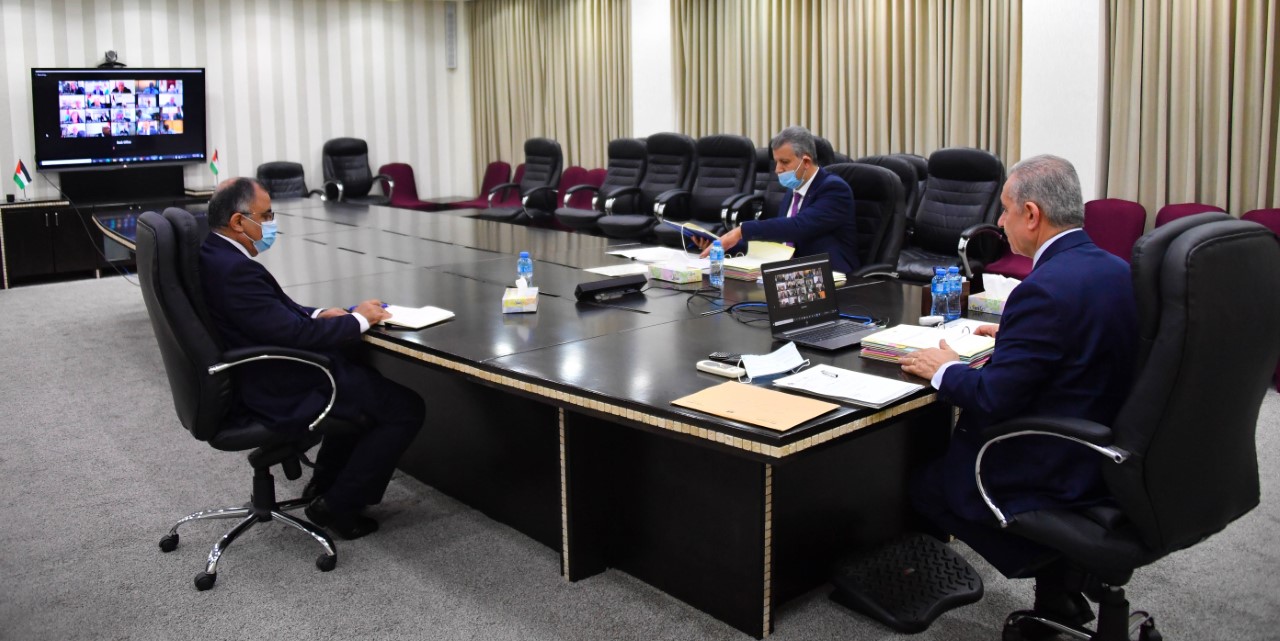 The Palestinian cabinet holding its meeting in Ramallah through video conference. (WAFA Images0

RAMALLAH, Monday, September 28, 2020 (WAFA) – The financial crisis facing the Palestinian government is due to the money war waged by the United States and Israel against the Palestinians, today said Prime Minister Muhammad Shtayyeh.

Speaking through a video conference at the weekly cabinet meeting in Ramallah, Shtayyeh also said that the discontinuation in Arab financial support has also contributed to this crisis.

"The cause of the financial crisis that we have been facing for months is the money war waged by the American administration, and later Israel, and the discontinuation of Arab aid other than what Arab funds provide for projects, as well as the European Union, Asian countries and the World Bank, and these are mostly for projects and not for salaries," he said.

"The United States was providing us about $500 million, and these funds stopped and the aid that came from the Arab countries, amounting to about $350 million, has stopped, except what the funds provide us, and the Arab countries have not abided by their decisions related to the financial safety net to protect Palestine from extortion," he explained.

Shtayyeh said, "The Corona pandemic caused great damage to the world economy and to our economy, and our income decreased by 60%. Then came the issue of Israeli annexation based on the (US) Deal of the Century when the Palestinian leadership decided to absolve itself from the agreements signed with Israel, including the financial agreement. After that all relations with Israel were stopped. We implemented an austerity program and expenditures were reduced by about 70%, but in order to enhance your (the public) role and steadfastness and alleviate your suffering, we borrow about 400 million (Israeli) shekels ($115 million) from banks every month to pay only half the salaries, and we pay interest to the banks on this amount."

The Prime Minister explained that 350,000 salaries are paid every month, which go to military and civilian personnel, the needy families who amount to 120,000, including 81,000 families in the Gaza Strip, 140,000 employees in the West Bank and Gaza, in addition to 75,000 retired military and civilian personnel in the West Bank and Gaza, as well as the families of prisoners and martyrs at home and in the Diaspora.

Shtayyeh addressed the public employees, saying, "Your salaries will be paid to you in full when we get them (the clearance tax revenues collected by Israel) without any political blackmail from Israel or the United States."

He explained in figures the size of the massive deficit facing the treasury as a result of the cessation of financial support.