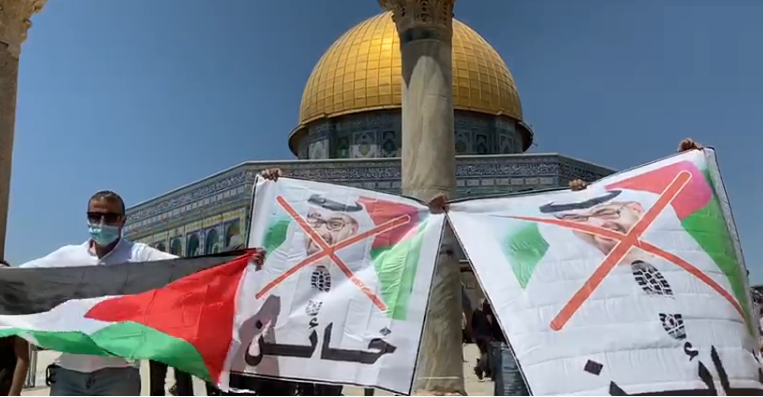 Protesters hold pictures condemning Mohammed bin Zayed, the UAE Crown Prince and the spearhead of the UAE-Israeli deal, during a protest at the Al-Aqsa Mosque compound, 14 August 2020.

RAMALLAH, Friday, August 14, 2020 (WAFA) – Thousands of Palestinians took part in rallies across the occupied West Bank and the Gaza Strip today, in condemnation of the US-brokered Israeli-UAE deal reached yesterday on normalizing the relations between the two countries.

In occupied Jerusalem, hundreds of worshipers held a protest following the weekly Friday prayer at the Al-Aqsa Mosque compound, where the protesters waved flags of Palestine and banners decrying the UAE's shameful declaration on normalizing its relations with apartheid Israel.

In Nablus, north of the occupied West Bank, hundreds of protesters demonstrated in the city's main square following the Friday prayer. The protesters chanted slogans that condemned the declaration as a stab in the back of the Palestinian cause and the struggle for statehood and independence.

A major rally was also organized at Palestine Square in Gaza City, where the protesters chanted slogans decrying the UAE declaration as a betrayal of Palestine and the struggle of the Palestinian people.

Similar rallies and stands in condemnation of the declaration were also organized in many areas of the West Bank, including in the towns and villages of Yatta, Hares, Kafr Qaddum, as well as in other areas and towns in the Gaza Strip.